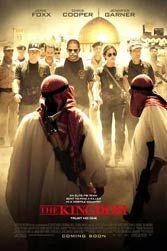 The experts ignore the smarmy local sheriff, in the person of diplomat Jeremy Piven, and get down and dirty (yet their hearts also bleed). Call this a protest movie — oil-grabbing self-interest ails the “kingdom” — but when all’s said and explosively done we’re in action flick with foreignness as a go-team lubricant. A few good men (and a girl) may not be able to right the wrongs, but they’re not gun-shy either. Surprise, surprise.