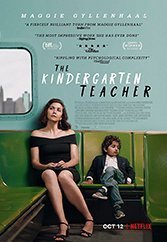 There’s only one character in “The Kindergarten Teacher” worth caring about: it’s Lisa Spinelli, the teacher of the title, played to melancholic, agitated perfection by Maggie Gyllenhaal. Her husband is nice enough and attentive, but forgettable. Her teenage children are irritating and difficult, but perhaps no more so than the average teenager, and they’re seldom on screen. There’s Jimmy (Parker Sevak), the five-and-a-half year old poet prodigy in Lisa’s classroom on whom Lisa projects her own thwarted creative desires and ambitions, but Jimmy has little to say, and his poems emerge from a trance-like state that doesn’t add to his presence.

So it’s all about Lisa. On the surface, she has a reasonable life. But as she tells little Jimmy late in the film, she feels “squashed.” “The world is going to erase you,” she says, “you’ll be in the shadows, like me.” What Lisa means by “the world” is not clear, nor is it obvious what is involved in being “in the shadows,” and if Lisa has been “squashed,” it’s not apparent who or what might have squashed her.

Lisa longs for an artistic side, and to achieve it she writes poetry, first for herself, then in a poetry class, taught by Simon (a seductive Gael Garcia Bernal). Unfortunately, she isn’t, and isn’t likely to be, a good poet, and she has no other plan to become a happier, more fulfilled person. It’s poetry or nothing (although a few scenes suggest that sex could play a role, too). Poetry is where little Jimmy comes in, the object of Lisa’s obsession and the sign of her appalling limitations. Perhaps Lisa has squashed herself.

“The Kindergarten Teacher” is notable for Gyllenhaal’s portrayal of an intensely driven woman. It’s one-dimensional characters —including Lisa — restrict its potential. Obsession, it turns out, isn’t complexity.

This review was written by William Graebner.