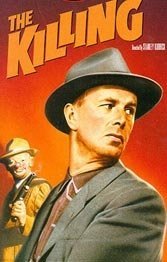 At the time 27-year-old Stanley Kubrick set to work on this film, most Hollywood crime thrillers, even its typical noirs, were star-powered capers driven by an ABC of linear narrative that usually made cop or detective into a hero, however grim. But Kubrick had something else in mind: a bank heist story that went about telling itself in the laconic way a Swiss clock ticks, without frills, using musical genre swings and time-coded phrasings as grammar and punctuation, and letting the clock’s hands sweep back as well as forward.

Johnny Clay (Sterling Hayden) is fresh out of prison but already scheming a racetrack robbery, which Kubrick ingeniously presages by opening with the same racing scenes he’ll recycle later. He hires a crew, sets the plan into anatomical motion, and then tries to keep things together after one member’s greedy wife gets wise. The progress toward the heist has less to do with the simmering idiosyncrasies of the crew than how the pieces fit together time-wise, with a voice-over and percussive riffs ensuring a state of near-constant peril.

Kubrick oils this machinery with typically sinister faces, Elisha Cook Jr. as George, whose eyes bulge, and noir queen Marie Windsor as Sherry, his lurid wife; Timothy Cary is the chilling Nicky, a racist marksman with a lisp who talks murder while cradling a puppy; Kola Kwariani is Maurice, a chess-playing Siberian who loves mobsters and tells Johnny, “You have never been very bright… but I like you anyway.” Hayden’s unflappable Johnny is arrow-straight, above the fray, and coldly determined, if only he had better taste in suitcases.

It’s interesting that Kubrick would later decide to film Anthony Burgess’s “A Clockwork Orange,” for no other reason than the clockwork of the title. Clockwork is this story’s crowning glory and crying shame, idealism and venality made slaves to the eerily recurring pieces of a day destined to end badly.