The joy of grilling 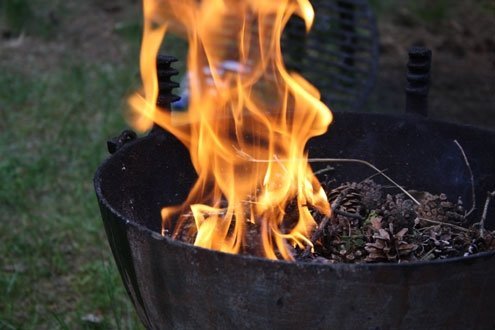 It all started with goats.
T

here are few things in the culinary world that America can claim as its own. Ground beef patties were popular with Genghis Khan’s army in the late 12th century as meals on the go. Hotdogs earliest relatives date back to the 13th century in Frankfurt. Pies were found in medieval courts across England, France and Italy.

The barbeque, however, is strictly American. Barbequing originated in Florida and various Caribbean islands where Native Americans would dig a large pit, place a whole goat at the bottom, cover it with agave leaves, pile hot coals on top, and then bury the coals with earth. A few hours later the goat was dug out and consumed, succulent and falling off the bone. They called this method barabicu.

But the Spanish brought a key element with them that moved this older form of cooking toward our modern day version.

When Spaniards settled in South Carolina in the early 16th century they brought pigs. And the locals quickly adopted pork into their diet, and showed the Spaniards how to slow-cook the entire animal, both buried (as mentioned above) and indirectly, with hot smoke — the first true barbecue.

Cooking techniques across the globe originally developed from a combination of two things, necessity and available resources. While the Spanish were salting and air drying cod to get them through the colder months, Native Americans were smoking venison to accomplish the same goal — ensure that they had enough food to get them through the leaner months. The need in each case is the same, but the resources vary greatly.

The Mediterranean provides steady sea breezes to dry food out, which would have been impossible in the swampy southeastern United States. America, on the other hand, had, and still has, forests full of massive hardwood trees. As opposed to the gnarly olive trees and smaller scrub trees that line the sea coasts in Europe.

In the U.S. a ham (a pig’s hindquarter) is slow cooked for half a day in a smoke pit and turned into pulled pork. While that same cut is air-dried for a year (or more) and becomes prosciutto in Italy and jamón ibérico in Spain.

This means the more lignin a wood has the hotter it burns and the longer it will burn, both sought-after qualities. American hardwoods — oak, hickory and maple — all have very high lignin contents, making them great for cooking.

Now where does all this leave me? After culinary school at Gambero Rosso this spring and summer I went home for a relaxing family vacation. Not surprisingly, I spent the bulk of my time cooking. And while some Italian staples are hard to find at home, the problem can work both ways. One of the things I miss the most living the center of Rome is grilling.

And I don’t just mean getting a grill going and flipping some burgers, or lighting some charcoal and grilling some chicken. I crave the huge fire pit my dad and I built some years ago at our house in northern Connecticut.

So for a friend’s birthday party of about twenty people I was put in charge of food. I decided to merge my Italian training with an American standard. After discussions with the birthday boy, we decided on a leg of lamb as the centerpiece of the meal.

We found an 11 lb (5 kg) leg, which would have dried out had we solely cooked it over the fire. An overnight marinade and finishing it cooking in the oven solved that problem.