The joy of a sunny day 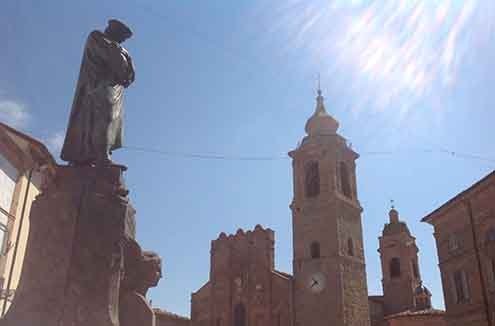 San Ginesio: After major earthquakes, you count your blessings based on tranquil days.
A

n earthquake is aptly named. Since late August, my small town of San Ginesio in central Italy has quaked over and over. Most times it felt unpleasant. Sometimes it was frightening. But we coped. Then came October 26, when two temblors hit only hours apart. Unlike the August 24 quake outside Norcia, no one died. But death isn’t the only measure of an earthquake.

I can’t say is that we weren’t warned. The toads tried telling us something was amiss. They were everywhere where they usually are not.

It’s a strange and remarkable fact of nature that toads flee their underground burrows before an earthquake. They’re fantastic seismologists. They sense chemical changes in the water and soil and begin leaping out of the ground in droves. One evening, I had to drive around hundreds them while coming home. Two days later came the quakes.

Toad-watching aside, what can you do? Unlike hurricanes, earthquakes aren’t on the list of predictable natural phenomenon. Nothing can contain them nor can anything really prepare you for what a serious one feels like, particularly in the countryside. I can only describe it in stages. First, you hear a deep, nerve-wracking and thunderous roar emanating from the nearby mountains, in our case the segment of the Apennines that runs through Le Marche. The roar lets you know it’s coming but what it doesn’t tell you is how intense the shock will be. Moments later, it hits.

The two October 26 quakes were brutal short bursts that measured 5.4 and 5.9 on the Richter scale. After that came aftershocks. Five days later a quake measuring 6.6 (the most intense in 40 years) struck further west, in Umbria.

During the October quakes we felt like we were in a matchbox being shaken by a giant. After that came a boom from the mountain — the sound of the land literally rearranging itself — and all returned to normal. Except it didn’t.

The month since has felt like an eternity. Time slowed down. Two thirds of the citizenry n areas around us lost their homes. Our own town remains cordoned off.

But we were among the lucky ones. Our house survived. Many homes did not, and the displaced residents now live in in camper vans, containers, sheds, and sports halls. Some who still have standing homes wouldn’t move back because of the aftershocks, which came daily for weeks.

Police are everywhere. Police branches I’d never heard of turned up. The reassuring they provided at the beginning soon turned oppressive. An atmosphere of suspicion began to loom.

Some people whispered about looting while others spread rumors of non-victims parking in meals intended for the homeless. The initial camaraderie — a community coming together in the wake of a crisis — was replaced by a fear of strangers and widespread distrust.

Only now do I realize how cosseted we were in our “before.” Until a few months ago I’d think nothing of leaving my purse and keys in my car and the key in my front door. Now I think twice.

Eastern Italy all along the Apennines range has always been a rugged, insular place. These are true mountain people, sturdy and dependable. They can sometimes be strange, but overall they’re good and kind. But the October quake brought let the outside world flood in, something the locals don’t like. They’d normally respond by locking their doors and bolting them shut. But they can’t: the earthquake has left them vulnerable.

The atmosphere has also changed. Where once people were jolly, friendly and kind, they’re now scared, sad and traumatized. In financial terms, the quake cancelled all my teaching work and potential earnings for the next holiday season. Businesses had it far worse.

Say you run a bar in town, a family business, and suddenly the town is cordoned off. What do you do? Rethink your whole life? Or do you just wait and hope that things return to normal as soon as possible? But people can be remarkably patient. I’ve learned that living in San Ginesio. They have the ability and the will to wait things out.

I’ll do the same. I’ll also remain grateful we still have a roof over our heads. Every day I tell myself things are bound to get better. There are already a few signs of progress. Simple things, like the dawning of a pleasant, sunny morning have never seemed sweeter.