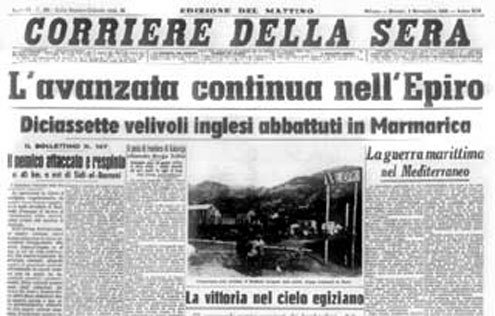 or modern Italians, participation in other people’s war should stop short of death. It can cause theatrical opprobrium and generate censure of the United States, lately considered the world’s foremost war-maker. It can generate reams of political prattle. But when a war actually behaves like a war, claiming victims, trouble starts.

The recent death of six paratroopers deployed in Afghanistan (following 16 dead in a 2003 suicide bomb in Iraq) has generated outsized outrage in a country where non-natural death is not only seen as dramatic but also reminds Italians of their global inferiority, stirring up memories of strategic haplessness.

Out of it came La dolce vita (albeit more ironic than sweet) as well as adamantly humanist opposition to the death penalty, long before the rest of Europe embraced such resistance.

Italy still boasts among the lowest per capita homicide rates in Europe and gang warfare, nasty though it, almost never produces large-scale revenge. Guns are illegal and high school firearm violence is so far unthinkable. Rome meanwhile hosts the pope, who every week rues a world of woe.

Since the war, Italy has faced systematic domestic violence only twice, in late 1940 when anti-Fascist scores were settled, and in the late 1970s, when the ultra-Marxist Red Brigades killed politicians to get attention.

War itself did Italy no favors. Despite Futurist enticements, Italian soldiers, sailors and airmen were considered generally unreliable, with incompetent leadership and inferior equipment. Heroism lost out to buffoonery. “With absolute certainty I tell you will crush Greece’s kidneys,” Mussolini announced in October 1940 as he sent half-a-million Italian troops into Greece from Albania. By December the offensive had met fierce resistance and stalled.

Time Magazine seized on the setback and manufactured stereotypes. It wrote: “Most Italians abhor cold as they do the sharp Greek bayonet, which Rome last week plaintively called a ‘barbaric and inhuman’ weapon.” And later: “Italy’s erratic Air Force … stayed at least 10,000 feet up, to avoid hitting mountain peaks or being hit by Allied [antiaircraft] fire.”

German troops moved in to assist the bogged-down Italians, ensuring Greece’s kidneys were in fact crushed. The failed Greek campaign claimed nearly a third of the Italian dead — more than 60,000 — before the 1943 armistice.

But Italy was unable to escape its disinterested reputation, even when its soldiers served mostly in brokering roles. In the 1980s, military peacekeepers dispatched to Lebanon were criticized for establishing too-cordial relationship with locals, particularly Palestinians — something the Italian troops by contrast took pride in (as they do in Afghanistan).

The paradox arises when peacekeepers or back-line soldiers suddenly fall victim to the generalized absence of peace — which characterized day-to-day life in Iraq and Afghanistan. Victims are instantly transformed into heroes, their death the needless result of kowtowing to America. Shouldn’t it be obvious, say critics, that the Iraq and Afghan missions are not only submissive but doomed to failure?

Ironically, however, this knee-jerk response falls into line with the kind of post-World War II rationalization that stained Italy’s 20th century reputation. Italy’s military fared poorly not because its soldiers were poorly trained and unmotivated, apologists argued, but because they were actually too smart, or too shrewd: Firs the Germans and later the British and Americans were obviously better trained and equipped to do the dirty work, and better led, which Italian troops knew. So why charge ahead when others did it better, and more convincingly? Who was so stupid as fail to recognize ways around ultimate self-sacrifice?

Before ceremonies for the six dead paratroopers, Northern League chief Umberto Bossi stated the obvious: “We sent them there and they came back dead.” War can do that.

Bossi was one of a slew of Italian politicians and intellectuals to speak in public or on television in what amounted to two days of both sincere and manufactured indignation. None ever served in a war.

“We must widen the scope of the ‘Italian method,'” Foreign Minister Franco Frattini said vaguely, “and that means combining security with extreme professionalism in regard to the people who are suffering, combining it with reconstruction.”

So long as no one dies.