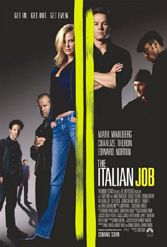 A woeful reshaping of the 1969 Michael Caine heist flick, which, truth be told, had plenty of holes. The original was set cleverly in Turin, this one gets L.A., but the result is the same: lots of cute cars (Mini Coopers), flummoxed cops, traffic jams, and a host of nary-a-pimple thieves (Charlize Theron is a safecracker). The movie’s Venice opening is a treat for the grand speedboat getaway, but the movie’s people seem like cardboard figures lying in wait for action sequences. Of sincere Mark Wahlberg’s Charlie Croker you might say (to paraphrase Lloyd Bensten on Dan Quayle): “Mr. Walhberg, I saw Michael Caine, and you sir are no Michael Caine…” Director F. Gary Gray makes his living on snappy music videos. It shows.