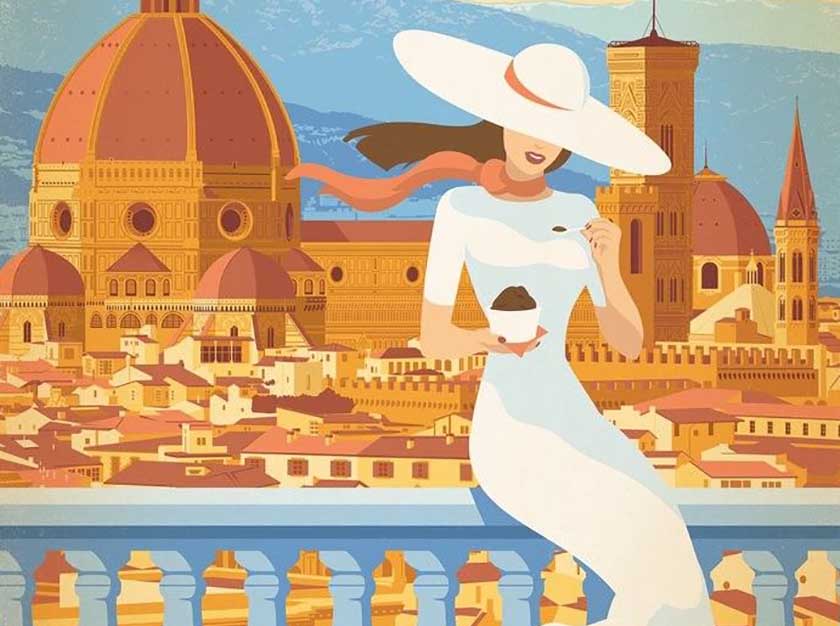 One view of Italy comes from idylic travel posters and cheering TV shows, another comes from Americans who have lived there.
I

have found myself up against a reality I thought had set aside when I returned to the United States from Italy four years ago, settling in a small town in New Hampshire. The problem has come up again with TV program “Stanley Tucci Searching for Italy”, airing on CNN, and the repeated invitation to join a local Italian language group.

So it is that I am once again confronted with what I call the “Italian dream conversation.”

This conversation is usually with someone who expresses envy toward my former life in Milan and my ability to speak this musical language they think so beautiful.

The person doing the envying almost invariably believes that I love Italy (and Tucci’s popular show) in just the same way they do. The conversation usually ends when they say they dream of actually living in Italy themselves.

You’d think by now I’d have a strategy for dealing with the Dream conversation. But no, even though I’ve heard it for three decades and know most of its key points by heart, the Italian Dream conversation still burdens me with anxiety, frustration, and even irritation.

I’ve tried to write about this dilemma before — many times, in fact.

The conservation usually begins well enough on my end, but soon sours into a rant. It’s like cleaning out the attic. Before you know it, you’re busy glancing through the very magazines you’d gone up there to collect and throw out.

When someone has wrongly assumed something about you, do you just go ahead, accepting their false premises?

So what is it about the Italian Dream conversation that ends up upsetting me so much?

There is its amateur vs. professional dimension, which has a lot in common with another dream conversation, this one about writing. It happens when a blogger is an immediate expert in journalism and writing and schools the professional who has been at it for half a lifetime. In the Dream conversation, an amateur who has taken a cooking course in Tuscany or seen a few TV shows knows more than I, who has been cooking Italian food —per forza — for 30 years.

I feel like the veteran pro football player having to deal with a Monday Morning Quarterback, or a trained medical doctor with a Wikipedian.

The Italian Dream conversation is socially awkward, like any conversation based on a misapprehension. When someone has wrongly assumed something about you, misunderstood your political views for example, do you just go ahead, accepting their false premises? At what point, to return to the subject at hand, do you tell them you actually don’t care about Tucci’s adventures? Or you don’t really have a soft spot for Italians who sing from their balconies?

Too often, I just want to get off the bus because the Dream conversation makes me feel uncomfortable, in the same way I do when someone seems to go out of their way to compliment me.

The Italian Dream conversation makes me feel backed into a corner, pushed into validating someone else’s imaginary landscape at the expense of the reality through which I actually lived.

The truth is that no one ever wants to know what life is really like in Italy. They want idyllic programming. They want to believe that I lived their dream and that I share their passion for the “amazingly beautiful” country. This makes me feel both used and invisible.

One way of looking at the Italian conversation is to regard it as a form of cultural appropriation.

Like all humans, I want to be seen in three dimensions, for what I really am is not someone’s projection or caricature of the ideal Italian vacation. And that’s because the Italian Dream is based on longstanding stereotypes. It permits entry only to a flat, cookie-cutter version of who I am.

Should I care that the Italian Dream is not reality? Should I say so? Again, I feel trapped. To disabuse an Italian dreamer is to do violence to something they hold dear.

What kind of mean person would stain their postcard?

I take no pleasure in destroying their dream, trust me, yet I can’t stand it when things are inaccurate or imprecise.

One of two things happens if I point out the difference between the reality and the dream. Either the dreamer is offended — how can I even think that just because they sing the country’s praises they aren’t aware of its bleaker side, its jammed up bureaucracy, built-in chaos, and, of course, the Mafia (more stereotypes)? Or they dismiss me as bitter. I’m just angry because I was once a dreamer too, until the illusion was torn from my eyes, probably my problem and not Italy’s fault in any way.

One way of looking at the Italian conversation is as a form of cultural appropriation. Behind the Dream conversation is a colonial view of Italy and Italians, whose culture is used as a commodity by outsiders for their own purposes, with little regard for what that culture means to the people who created it and now live in it.

I could go on, but I might rant, which serves no purpose whatever.

The attic magazines are still up there, but at least I’ve managed to sort them into more orderly piles.

But I’m no closer to a good strategy for confronting the Italian Dream conversation. I guess I need time more time than I thought.