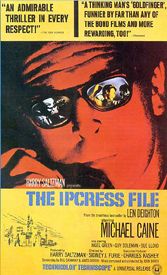 If Sean Connery’s James Bond was the decade’s spy-as-sex-object, Michael Caine’s Harry Palmer — disheveled and disenchanted — turned the tables. He was a sour Cockney secret agent, a Home Office anti-hero. “Ipcress” rightly made Caine (born Maurice Micklewhite) into a hot commodity. Given a choice, Palmer probably wouldn’t even go to work, but intrigue comes after him. While Ian Fleming peddled Bond into a globe-hopping caricature, novelist Len Deighton preferred reveling in the down-and-dirty jazz of Cold War London.

Director Sidney J. Furie takes most of the mystique out of the spy game — it’s a bureaucratic nightmare — until Palmer is pressed into the hunt, which involves the brainwashing of British scientists. (In fact, Daniel Craig’s vulnerable, 21st-century Bond owes a debt to Deighton’s Palmer.) “Ipcress” is a memorable period piece with a haunting John Barry score. If you have a soft spot for Micklewhite-Caine, don’t dare miss it.