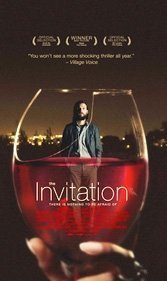 Moody, brooding Will (Logan Marshall-Green) and his partner Kira (Emayatzy Corinealdi) are headed for a dinner party in the dark L.A. hills when they slam into a wayward coyote. Will’s coup de grace comes courtesy of a tire iron. Talk about ominous openings.

But director Karyn Kusama (“Jennifer’s Body”) takes a long time before her next move. Turns out Will is (reluctantly) visiting the home of his ex-wife Eden (Tammy Blanchard) and her new partner David (Michiel Huisman) for the first time since the violent death of their son Ty. In the interim, Eden and David have been to Mexico and joined a cult whose leader speaks in bromides such as, “Accept the invitation and look only ahead…” Which leaves you to wonder just what that invitation might be.

Though Will is ostensibly among friends — it’s a reunion of sorts — he grows increasingly suspicious, hostile and paranoid, all the more so when cult member and wife-murderer Pruitt (John Carroll Lynch) joins the “festivities.” Is Will’s growing sense of menace in his head — “Something doesn’t feel safe here,” he says — or is something about to go deeply and desperately wrong in this posh but feral house?

Kusama’s movie works well enough as an exercise in trauma — loss can make you think the walls are closing in. It’s less successful as a thriller because to get to heart of the matter means wading through an hour of discomfort and fraught small talk until Kusama detonates her bomb, which once it explodes is high on mayhem but low on surprise. “They’re a little weird,” Will’s gay friend Tommy says of Eden and David, “but it’s L.A.” Indeed it is, and at one point even the Manson family gets a mention. Guess how this ends?