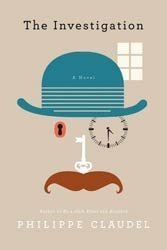 By Philippe Claudel, translated from the French by John Cullen

From the moment the Inspector arrives in Claudell’s Blade Runner-like city, something’s amiss. He’s come to establish why suicides are on the rise inside an all-encompassing but amorphous multinational known only as the Enterprise. But from the moment he checks into his eccentric hotel, he’s plunged into a sinister, fairy tale-like netherworld in which both mind and matter disorient. Rooms change shape, weather shifts from sun to snow, and the characters on display — the Policeman, the Security Guard, the Founder — are bizarre reflections of the bland Inspectors worst nightmares. Soon, the real world’s logical tasks and intentions have been replaced by wholesale surrealism. The Inspector is unwillingly interloper in a Magritte-inspired city whose cruel day-to-day exists to tease and torment a man who once considered himself reasonable and rational.

Writer and filmmaker Claudel, whose 2008 novel “Brodeck” was a masterful examination of shared guilt and amorality, may have bitten off a bit more than he can chew, introducing no-global style themes into which he thrusts his gradually more demoralized narrator, leaving him gasping for air and meaning. Claudell’s disdain for the dehumanizing corporate “personality” is a drumbeat constant: “Today’s monarch’s don’t have heads, or faces, either. They’re complex financial mechanisms, algorithms, projections, speculations on risks and losses, fifth-degree equations. Their thrones aren’t material thrones, they’re screens, fiber optics, printed circuit boards, and their nobility is the encrypted information that circulates through them at speeds faster than light.”

In such a realm, the Inspector is an “anti-man” forced to reckon with his insignificance: “I’m just a simple pawn, a kind of flour mite.” But it’s never clear whether his status as pawn is intended to illustrate the absurdity, arrogance and agony of the human condition, or if instead he’s an accidental tourist condemned the inescapable anonymity that is life. Claudell gets his Inspector in knee deep in madness only to suddenly fade to black.

The thematic metaphysics represent a revisiting of similar ground covered by Polish futurist Stanislaw Lem in his own 1959 “The Investigation,” in which a Scotland Yard investigates missing corpses only to face bigger questions.