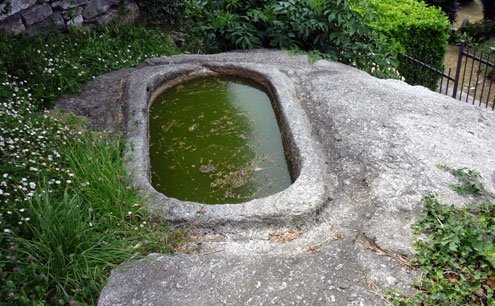 ake Como in Lombardy is shaped like an inverted “Y.” The Triangolo Lariano is the triangle between the two branches. Brunate, the start of our hike, is a town on the western shore of the triangle, 500 meters above the city of Como and the lake.

Como sits on the bottom tip of the western branch of the lake. To get there from Milan, we take a train from Stazione Nord in Piazza Cadorna to Stazione Nord Laghi in Como. Trains are frequent and take an hour. From the Como station, we walk straight to the waterfront and keep to the right of the port until we reach Piazza De Gasperi and the Liberty-style, wrought-iron gates of the funicolare, a funicular railway.

Inaugurated in 1894, the funicolare opened just as mass tourism began on the lake. It was steam-operated until 1911; since then, electricity has powered the cable-carriage. The funicular rises 500 meters at a 55 percent incline, linking Como to Brunate and the hills over the lake. As part of the public transport service, it costs €1. In seven minutes, we’re in Brunate (715 meters).

Here, from Piazza Bonacossa, we follow Via Beata Maddalena Albrici, admiring tall, 19th century villas. Past Bed&Breakfasts and the church, we see signs for the village of San Maurizio. We take a stone mule trail, “Via Mulattiera San Maurizio,” also marked with a red-and-white striped Club Alpino Italiano (CAI) sign 1. We then begin a 430-meter ascent with shimmering Lake Como on the left. In all, we will hike for about five hours with a long, 950-meter descent.

Once in San Maurizio, to the side of the church, we take the cobbled path to Baita CAO (Club Alpino Operai). From CAO, we follow signs to the refuge, Baita Carla. Up the road to the left, we continue on a dirt trail through woods towards Monte Boletto. The houses vanish. Azure Lake Como peeks through leafy trees while green slopes envelop us.

Near Passo Tre Termini (1,140 meters) the view opens and we see a field of ferns bordered by thousands of lilies-of-the-valley. I wish we’d come earlier in May because the lilies blooms are now dried brown. We marvel at ferns growing in the open rather than on the forest floor, but the Triangolo Lariano is known for its particular flora. We look down on the hills of the pre-Alps and the padana plain, the town of Erba and to Lake Alserio.

We continue on the path to where we see a forest vehicle road on the right. It leads to a steep 250-meter climb up Monte Boletto. From atop, we catch our breath and gaze over Lake Como, the Triangolo and the plain. Then we return to Baita Carla on the road.

At Baita Carla, we stop for a picnic lunch. A group of cyclists eats on the restaurant terrace overlooking the lake. Afterwards, below the baita, we take a trail on the left to Monte Piatto and Torno. We climb a little then start a long, soft descent. Eventually, we arrive at a park and follow a walkway among the houses of Monte Piatto. Then we start an arduous descent down steps through woods for another hour.

We emerge just above Torno, where CAI signs point to Monte Piatto, Pietra Pendula and Piazzago. Just below these signs, we see il masso avello di Caraniso in the garden of a house. It looks like a bathtub dug into rock. However, massi avelli are post-Roman, pre-Christian era (fifth-sixth centuries) tombs of uncertain origin. No grave has ever been found intact, so little is known about when they date from or the mysterious populations (probably Goths or Franks) that carved them. They are sculpted from “errant boulders.” These are massive, usually granite stones from the nearby Alps. Ice-age glaciers left them on the limestone ridges around the lake.

We continue down the road to Torno, following signs and the typically high, Comasco campanile tower of the Romanesque parish church of Santa Tecla in Piazza Casartelli, facing the lake and quaint port. We visit the church with its wood sculpted pietà and De Benzi’s 15th and 16th century frescoes. We bask in the piazza’s sun like tired cats, listening to the revelry of a wedding and children chasing ducks into the water.

Torno sits on a promontory, seven kilometers from Como. Its history dates back to Roman times. Pliny the Elder (23-79 AD), born in Como, first described the phenomena of an intermittent natural well later incorporated into the Villa Pliniana (1573). In 1522, Como destroyed Torno in a conflict for command over the western branch of the lake. Torno never recovered its splendor or activity. While dredging the port in 1870, arms and naval equipment from the 13th to 16th centuries were recovered. Como carried these off, too. They are now in the Giovio Archaeological Museum.

From the port we take a battello. Ferry services also began with 19th century mass tourism. We cross the lake to Cernobbia and then, with the late afternoon sun and breeze on our faces, we sail back to Como, passing villas on the lake and the funicolare to Brunate. Before boarding the train to Milan, we reward ourselves with Sicilian ice cream in Largo Giacomo Leopardi near the train station — the pistachio is sublime.