The Invention of Curried Sausage 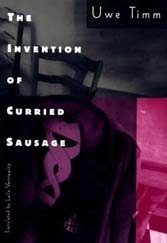 By Uwe Timm, translated from the German by Leila Vennewitz

It has been a long time since a book made this reviewer smile. And if its cover blurb were any indication, you might not expect Uwe Timm’s “The Invention of Curried Sausage” to be an obvious candidate for the honor for doing the honors.

A nursing home, a sausage stand on Hamburg’s gritty waterfront, Germany in 1945, a deserter, infidelities and a dash of concentration-camp-discovery horror hardly seem to add up to a deft and charming narrative. But they do in this story of a man’s search for the origins of a kind of sausage, whose Hamburg origins he wishes to defend against false claims from Berlin.

The narrator plies an elderly lady in nursing home, whom he believes is the inventor of the sausage, with cake and tea, hoping to get the real story from her. He does, eventually, and he also gains adult understanding of his own childhood memories of the war’s end. The story skips around among the narrator’s memories, the present and the points of view of the woman and deserter.

But Timm’s skill is such that the movement is neither self-consciously arty nor confusing. With equal skill, Timm slips in vivid pictures of a historic moment — “British” soldiers who speak Hamburg’s dialect, a rooster sitting on a cart of scrap wood, a black-marketeer with a pig in his overcoat, the corpse of the self-hung neighborhood watchman dangling over his World War I helmet — without ever detracting from the intimacy and perhaps the real core of the tale, which is really about an older woman transcending her passing youth and brutal present with spirit and even a little nonchalant joie de vivre.