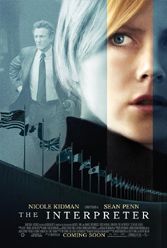 Good chemistry between stars Nicole Kidman and Sean Penn rescues this otherwise heavy-handed post-9/11 political thriller. Kidman is Silvia Broom, a UN translator who inadvertently overhears what sounds like an assassination threat against Edmond Zubanie, the genocide-tainted leader of the African nation of Matoba. Broom, of course, is a white Matoban (think South Africa or Namibia) whose family was massacred at home. Enter Secret Service agent Tobin Keller (Penn). Keller must peel the plot’s potato before Zubanie comes to New York to address the General Assembly.

Sydney Pollack’s movie is an odd hybrid of “The Peacemaker” (also starring Kidman) and “The Siege,” with rival factions taking their fight to the streets of New York as Broom twists in the middle with Keller (whose estranged wife recently died in a car crash) at her side. Much is improbable and melodramatic, but no harm, no foul.