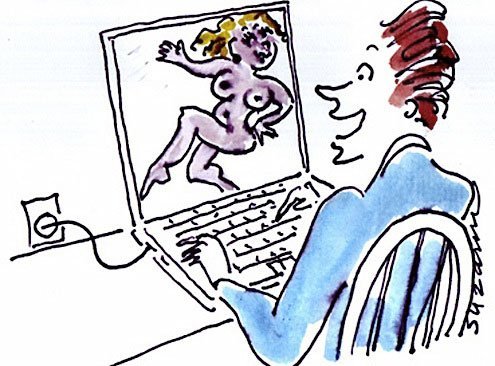 Eh, all I do is install the modem. Setting up the network is the client's problem.
T

his isn’t meant to be a diatribe, invective or assault against any named or unnamed institutions, companies or persons. This is meant to be a recounting of the facts, pure and simple. Do I want vengeance? Oh yes. But I’m in the story business and it’s my job to weave a sequence of events without histrionics, without exaggeration, without augmentation. Therefore, a precious, unadulterated true life story is below.

It was the end of the world. Or so it seemed. What other scenario could explain the staggering incompetence that hijacked the simplest of transactions? There must have been a higher conceit, a conspiracy reaching into the darkest corners of secrecy, a system beyond all explanation and expectation of civilized society, all colluding against me.

Or maybe it was just the Italian post office.

All I wanted was internet for four months. Four months of clicking this link, that link, reading emails, and vigilantly staying clear of anything having to do with naked people (ehem). And, and! I wanted to pay. That way everyone would be happy.

So I called Telecom, the giant of Italian communication. Four months was out of the question, they told me. The shortest contract is a year. No dice.

I called another company. Same myopic vision of the market.

Then, I called FastWeb, fully expecting the yearlong treatment. “No, no, we do month to month,” said an agent.

Seriously? And I can cancel any time I want?

Are you sure you people are Italian? “Yes.” Skeptical, I jumped on board.

But there was a catch.

The two weeks they promised me for the delivery of the modem came and went without a peep from them. So I called to find out where the train broke down.

But to them, the train never even left the station; I didn’t exist. I wasn’t in their system under Fiorentino, Matthew, or that interminable mix of numbers and letters known as a codice fiscale.

Nothing. I was an apparition of my own misplaced imagination.

So I had to start over, this time putting my Italian girlfriend, Carmen, in charge of the operations. They might be able to pull one over on an American, but my Neapolitan bombshell is not to be duped.

After registering again, they told her the modem would arrive in a week. A faded yellow slip would arrive in the mailbox telling us where and when to pick up our magic box. But the week came and went without any yellow slips, faded or otherwise.

She called again, three weeks since the initial call. I was in the system this time, weighing ominously like a delayed flight. “Ten days,” the operator said. Ten days? It was “a week” a week ago, now it’s 10 days?

Throughout the promised 10 days we called daily to check for developments. And there were developments. Many of them. And every single one was different. Five days. A week. A week and a half. Two weeks. Some operators said we had to call a technician to install the modem after it arrived. Some didn’t.

There was no recourse. Nowhere to turn. No authority to contact. No one to scream at. The best we could do was call them “SlowWeb” and keep up the harassment. It didn’t help.

Eventually they confirmed that the package had been shipped, although they couldn’t tell us where it was or when it would arrive. A few days later, during the daily call, they told us that the package was at a post office in Rome. Success!

In the days that followed, our package bounced from post office to post office. Sometimes we were able to contact the office that allegedly had it, sometimes not. Regardless, we couldn’t find the package.

Finally it stopped; the package was in a post office in San Lorenzo, a neighborhood close to Termini. No yellow slip had arrived, but a number of different FastWeb operators and one post office official had confirmed the location. We figured this had to be it.

The next morning I went to the San Lorenzo post office with the tracking number of the package scribbled on a post-it note. When I stepped up to the counter they told me that I was in the wrong place.

But this is the post office of San Lorenzo, I countered.

“Yes,” she said. They told me to go to the post office in San Lorenzo. “You’re in the wrong place,” she said. Where should I go?

I left and began wandering the streets of San Lorenzo, stopping passersby to ask them where the post office in San Lorenzo was. They all pointed to the building I just walked out of. Then I found someone who knew what they were talking about.

“You’re not looking for a post office. You’re looking for a holding center for packages that were misdirected. Listen, you have to go here…”

I went to the holding center, a massive building on Lo Scalo di San Lorenzo with a fleet of yellow trucks sprawled around its foundation.

I found an official-looking guy and shoved the post-it note with the tracking number in his face.

“It’s impossible to find the package. Once the package arrives here we strip it of its tracking number. That way no one can find it.”

Without questioning this logic, I went home, package-less and defeated.

“YOU SIGNED FOR YOUR PACKAGE ON SATURDAY,” the operator told Carmen.

It was Wednesday, the day after my San Lorenzo adventure.

But that’s impossible, she pleaded. We don’t have the package yet. How could we have signed for it if we don’t even have it? “I don’t know, but you did.”

At this point, I told Carmen, we should just start over. But she was determined to find our modem. In a flurry of calls, she pressed our case on every operator she spoke with, threatening some, ingratiating herself with others, until we had enough operators searching for our package to ensure a fail-safe operation.

Give us five days, they said.

The faded yellow slip arrived within the hour. Within a day we had the modem. All that was left was for the technician to come and set up the connection. He showed up a few days later. We were stoked.

Nearly two months after the initial call to FastWeb, I was looking at the site for The Daily Show on my computer. We profusely thanked the technician before he left, offering him and his colleague espresso.

After he was gone, I clicked over to the site for The New York Times, expecting to get all the news that’s fit to print. Instead I found a blank page with a “No Server” message. I tried the Washington Post, nothing. Google, nothing. Yahoo!, nothing. Carmen was having the same problem.

We ran to the balcony and yelled to the technician. He trudged back upstairs. After checking all the connections he told us that everything was working.

No, look! Look at my computer, it doesn’t work, Carmen told him.

“Eh, all I do is install the modem. Setting up the network is the client’s problem.”

Then he left us, modem working, internet not, stunned.

We spent 45 minutes on the phone with the operator, who came to the conclusion that the line wasn’t working. We would have to call the technician to come and fix it. Hanging up the phone, baffled, we ran over the check list in the handbook that came with the modem again. The very last item on the list was registration.

Now, the only problem is the naked people.