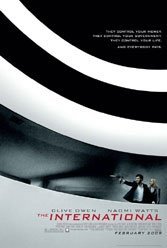 German director Tom Tykwer is a good storyteller. “Run, Lola, Run” and “Heaven” honor his usually keen sense of pace and purpose. This is not. It’s a poorly-conceived, anti-big banking screed that lectures pompously.

Louis Salinger (Clive Owen) is an embittered Interpol agent whose partner is murdered in Berlin on the verge of exposing the root-of-all-evil IBBC Bank, whose bread-and-butter is the weapons trade and pocketing interest from indebted Third World nations. Salinger is joined by New York prosecutor Eleanor Whitman (Naomi Watts, badly miscast) in a leaden David-chasing-Goliath chase that runs from Germany to New York, through Milan and Luxembourg.

The key to the story is Wilhelm Wexler (Armin Müeller-Stahl), a bank advisor and former STASI agent who cops a conscience after too much communism filtered through too much capitalism (hence the title, “The International”). As Salinger closes in on “the truth,” Wexler is able to tell him, “Justice is not impossible. You idea of justice is an illusion.” Salinger in turn can tell his superiors “You can’t just sit there and lecture me about protocol and procedure.”

For Tykwer, the world politics is the sum of banks, multinationals and terrorist groups that use nations to operate “within the black and grey latitudes.” Fair enough, but neither the black nor the grey are particularly convincing in a story chocked with caricatures and lacking in surprise. The only breath of fresh air is a Kabuki-like shootout staged at the Guggenheim. At the very least, the gunmen and the museum seem earnest. While the backdrops are pretty, the Bourne franchise is miles ahead.