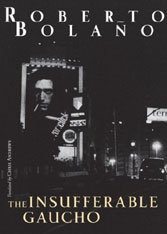 “The difficulty of finding warm places to sleep is one of the main disadvantages of being a police officer,” says Pepe the Cop in an anthropomorphic parable by the same name. Pepe should know. He is a rat (and nephew of Josephine the singer). Pepe is diligent and stubborn, a kind of Philip Marlow of the sewers (“… our kind never gives up without a fight…”). But when his detective work brings him face-to-face with a “disgusting predatory bastard,” a rat who murdered a baby, his species faith ebbs, all of which makes the furry detective despair. There will be no end to crime above or below. Life is criminal.

Bolaño’s liver was layers deep in “traveling toxins” when he published these swan song stories in 2003, the year of his death at age 50 (at one point he calls himself “a nightmare for the friends I don’t deserve.”)

“Jim,” a sliver that opens the collection, sets the tone: It’s is about a decaying American lost to Mexico who’d love nothing more than to be burned alive by the fire-eater who mesmerizes him. The title story follows a middle class Argentine doctor’s flight from Buenos Aires to the pampas, where gauchos seem to make more sense than the city.

But “Gaucho’s” sad sirloin, a literal howl of mind and flesh, comes at the end, with two endgame essays (“Literature + Illness = Illness” and “The Myths of Cthulhu”) that rage variously about dying, death, poetry, celebrity and best sellers. It’s an avowedly desperate Bolaño trying to fit himself into life and literature’s chaotic puzzle. Here we learn that Kafka was the 20th century’s greatest writer; that we live in the age of the writer “as civil servant, the writer as thug, the writer as gym rat…”; that the literary world is a self-serving “Club Med cunningly disguised as a swamp, a desert, a working class suburb…”; that political horror is a vacation from human boredom, that Penelope Cruz is a hypocrite and Mother Teresa a “rheumatic weasel” (a perfect dagger); that the abyss is the antidote and the antidote the abyss (all hail Marshall MacLuhan); that “writing and literature are worthless if they aren’t accompanied by something more imposing than mere survival.”

But Bolaño won’t survive, and he knows it. Instead, he hands down geoliterary definitions for the ages, the best of which is an observations on the Americas: “Latin America was Europe’s mental asylum just as North America was its factory. The foremen have taken over the factory now and the labor force is made up of escapees from the asylum. For over sixty years, the asylum has been burning in its own oil, its own fat.” Self-exiled from Chile, Bolaño, low on the liver transplant list, died in Barcelona.