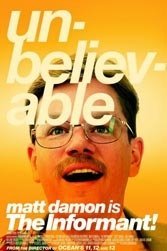 Soderbergh’s tongue-and-cheek biopic about white-collar criminal and serial liar Mark Whitacre is a reverse-throttle American Dream movie with a sense of humor. In 1992, biochemist Whitacre (Matt Damon) told the FBI that his Ohio-based corn products company, Archer Daniel Midland (ADM), was part of a global plot to fix lysine prices and reluctantly agreed to play whistleblower — “secret agent 014, twice as smart as 007,” at least in his own oddball mind.

For nearly three years, Mark, “Corky” to his wife, taped meetings and reported back regularly to his Fed handlers. But when the FBI finally got enough to move in on his evil bosses, the most creative huckster of all was revealed as the informant himself. Clear, that is, to everyone but Whitacre, who lies by rote.

Soderbergh manages this truth-is-stranger-than-fiction scenario thanks to Damon’s engagingly credible Whitacre, portrayed as a naïve cross between an upbeat blabbermouth and a self-aggrandizing tattletale. His apple pie sincerity dupes everyone. Evil is only where Corky chooses to see it, in the price fixing, making him the hero of his own story. So what if he embezzled a little money ($9 million plus) on the side. Or that he makes up stories about his parents. Or that eight out of every 10 things that come out of his mouth are made up. “I’m the good guy in all of this,” he says, and believes it.

The film’s delight, aside from Damon’s performance as a cornball bumbler who deceived both the FBI and his high school sweetheart wife Ginger (Melanie Lynskey), is the late Marvin Hamlisch’s kitschy, 1960s score, which give the absurd goings-on a “Pink Panther”-like comic feel and papers over the harder realities of a troubled con artist who can’t or won’t see the forest for the trees. In both the true story and acting departments, the film has a strong affinity with Richard Linkalter’s 2011 “Bernie,” another dark comedy about a good-natured American lunatic.