The Incident of the Tomato in Paddington Station 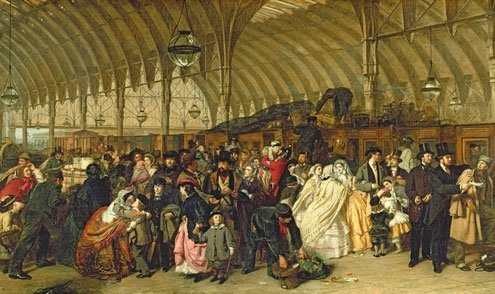 Once upon a time, every tomato was precious, even if "used."
F

rugality has become almost trendy since the financial crisis. Hipsters trade canning recipes. It wasn’t always this way. When I was growing up, frugality was anything but cool, particularly the orthodox variety of Extreme Frugality practiced in my home. Extreme Frugality peaked with The Incident of the Tomato in Paddington Station, which occurred in London in the mid-1970s. While visiting British friends in London, rush hour found my family in busy Paddington train station. For some reason — still unknown — a tomato suddenly emerged from among the hurried feet and rolled across our path. My mother lunged for it. “Why it’s perfectly fine!” she crowed, holding it high.

My brother, sister and I stared fiercely at the blobs of flattened gum and cigarette butts on the ground. We hoped that failing to share her enthusiasm would make Mom realize how icky it was. Mostly we hoped that staring at the ground would convince the crowds flowing around us we had nothing to do with her. “Not a spot on it,” she said. “It’ll wash up nicely.”

Only the intervention of Dinah, Mom’s best friend who was with us and whose frugality credentials equaled my mother’s, got Mom talked down from her precipice of extreme frugality and got that tomato into the trash where it belonged.

Usually Mom’s vice was less public. She could slip unused parsley, lemon wedges and butter pats from the plates of the finest restaurants into her purse unnoticed. She had a collection of plastic bags that was international and historic in scope, containing examples from far-flung travels and long-closed stores (the original Abercrombie & Fitch, Best & Co.). Mom dug out what was left in lipstick tubes and transferred it into a little silver box to use with a brush. She darned the toes of her nylons. If the rest of the stocking was shot, she cut the toes off to make Peds. From her I learned to amputate the damaged leg of panty hose. Combining this good half with that from another pair creates a “new” pair whose double top has a bonus “control” feature.

Dad was her accomplice. He turned the amputated pantyhose legs into paint filters or ties for tomato stakes. In his capable hands, seemingly empty toothpaste tubes revealed a surprising amount hidden inside when cut open. Dad funneled instant concrete powder and water into holes in the rusted tailgate of our old Mercury station wagon, known as the “Blue Bomb.” When a high school friend said, “Man, it feels like it’s full of concrete,” I didn’t have the heart to tell him…

One day when Dad stopped at the local potato chip factory on his way home, he noticed a huge roll of waxed paper being thrown out because the printed price on it had changed. It disturbed him to think it would end up as landfill. Although he could barely get his arms around it, he managed to roll it to the car and eventually hang it from a rod in our basement. Still hanging in our basement forty years later, the roll was sold along with my childhood home. The new owners found it cute.

While everyone else had normal sandwiches in their lunches, mine were wrapped in yellow and red waxed paper with dancing potatoes on it. I did not find this cute.

In fact, I thought this and all my parent’s frugal habits were just plain embarrassing, perverse even. My father was a successful doctor. We were not poor. My parents called it “character building.” We children called it weird and wondered if being poster children for their cranky ideas counted as child abuse.

Understanding of my parents came slowly. It began with my mother’s stories about the Great Depression, which was an unforgettable lesson on debt and the fragility of material life. She was eleven in 1929 and never forgot seeing the neighbors’ belongings auctioned on the front lawn in her wealthy Chicago suburb. Her favorite place to roller-skate was the empty sidewalks of a failed real-estate development. My father was ashamed that his well-off family could eat in restaurants. Driving a truck (at age 14!) for his father’s dairy, he disguised his good fortune by ditching his correct grammar and pretending he had had to drop out of school.

For my parents and many of their generation, waste was a “shame,” a “pity” or even a sin. Waste abused nature’s gifts. Waste was for the feckless, the ignorant and the weak. People who got sucked in by advertising or fear of not keeping up with the Jones wasted. Clever people knew how to reverse the direction of the stair carpet and use the unworn part on the riser. Strong people tore worn sheets in half and sewed them “sides to middle,” using up the good parts on the edges instead of buying new ones. The seam in the middle was a badge.

In short, frugality was not so much about saving money as it was about values.

I finally began to understand this as a teenager when my father reported that other doctors had complained that his beat up VW lowered the tone of the MD’s parking lot, which was filled with Volvos and Mercedes. I asked why couldn’t have a nice car like everyone else? “Because for that money we can go around the world. Cars don’t last. Experiences are forever.”

Dad was right. If we had had a Volvo, our family would not have been in London. No car, however fancy, could have created the memory of Mom — God rest her soul — in Paddington station. Mom was right, too. Washed up, that tomato would have been just fine.