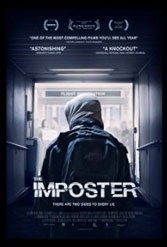 Director Bart Layton’s ominous dramatization of a 1990s child disappearance case has the thrilling feel of several “Ripley’s Believe it or Not” panels. In 1994, 13-year-old Nicholas Barkley went missing from his San Antonio, Texas home. Three years later, in Linares, Spain, a brown-haired French-Algerian vagrant Frédéric Bourdin conned his way into a local youth shelter. Bourdin’s “acting” skills and street smarts, aided and abetted by the gullibility of Nicholas’ mother and sister, gradually allow him to serendipitously step into the role of the missing blond boy.

His eyes are brown, not blue; his face has little in common with Patrick’s. He also speaks with a strong French accent and looks at least 20, not 16 (he was 23). But the Barkley family suspends disbelief and installs him into a role he knows isn’t his but satisfies his craving for affection. They accept his story of abduction, rape, brainwashing, and Manchurian Candidate-style re-education. “My main goal in life was not to think,” says Patrick’s mother in explaining her lack of common sense. His even more credulous sister rebuffs doubts raised by both the FBI and a private investigator.

Layton lets the camera-wise Bourdin tell his side of the story, which he does with a con artist’s suave assurance — “If there’s doubt, there is a chance.” When chance turns into a no-questions-asked welcome mat, a skeptical private investigator eventually quips: “It was starting to get ridiculous.” Layton tricks that ridiculousness to help push the hoax into more sinister territory. If Bourdin’s an imposter, what happen to missing Nicholas? Bourdin’s lies, which got him to Texas, yield to a rising sense of menace that eventually leaves a jarring mark on the entire story.