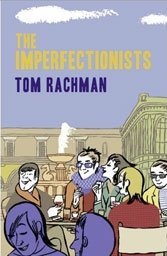 Tom Rachman’s much-praised first novel falls wincingly short of a challenge posed by a little-used but telling word, verisimilitude. In fiction it means writing “truly” enough to shut up skeptics. In paraphrasing reality, parody and caricature included, God demands his pound of details. License has its limits.

Here then is a book about the eccentric cast of a present-day English-language daily newspaper in Rome. That’s improbable enough since Rome hasn’t had such dailies in a quarter-century, and when it did they were as mottled as the city. Soon enough, the narrative falls prey to amateur hour mistakes. The wife of a staff member is rushed to the airport “after dinner” to catch an overnight flight to Philadelphia. After dinner? Never was, never will be; the time difference bars it. Later, a poignantly sad copy editor sulks home to feast on Häagen-Dasz, all but unavailable in gelato-crazy Rome. A clueless Cairo stringer claims he was once up for a Pulitzer when non-U.S.-based papers aren’t eligible. Insult to injury, an editor is disturbed by construction work that kicks off on New Year’s Eve. In Rome? Dream on.

As quibbles multiply, credibility and verisimilitude wither, sabotaging much good writing. The reason is that Rachman’s Rome paper is clearly based on the International Herald Tribune, the colorful Paris-based American daily that for decades was jointly owned by the Washington Post, The New York Times, and the Los Angeles Times, and now is run by the New York paper alone. He spent two years there and acquired a keen sense of misfit expatriates. Apparently uncomfortable with setting his “paper” in Paris, a snugger venue, he tossed a bone to Rome, where his characters are as at home as Häagen-Dasz.

For the paper’s editor, a forty-something woman, Silvio Berlusconi is “such a joke” and “Europe’s court jester,” improbable platitudes for a Rome veteran. No one on the staff speaks much Italian and all seem alienated by surroundings to which they won’t adapt lest they lose their quirky sheen. The comic side of Rachman’s “over there” hinges on resistance to Italy.

Ironically, his most luminous moment comes in describing not a person but a river, Rome’s Tiber, “… left to its own devices, a strip of jungle winding through the caterwauling city … snagging what litter washes downstream.” Well-observed.

Otherwise, the paper’s losers are themselves little more than bits of river litter, including its once-and-present Atlanta owners. Rome makes no substantive appearance, leaving the storyboard cutouts to populate a vivid but improbable burlesque about dwindling journalistic life across the pond.