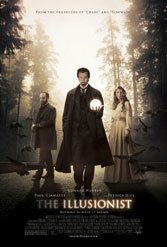 In turn-of-the-century Hapsburg Vienna, where science often did battle with magic and superstitious spiritualism, illusionist Eisenheim (a muted Edward Norton Jr.), son of a lowly cabinetmaker, returns home after headline-grabbing world travels. His show features a stylish array of surreal displays that grab high society’s attention, and that of ambitious archduke Leopold (Rufus Sewell), who aspires to succeed his father. But when he mesmerizes the archduke’s finance Sophie (Jessica Biel), who turns out to be not only a long-lost childhood friend but also the love of his life, the story spins into charmed darkness, transformed first into an astute portrayal of male rivalry and later into a wonderful detective story.

When a murder puts the illusionist and the archduke at odds, the city’s chief inspector (a Poirot-like Paul Giamatti) is charged with undoing the magicians. But the undaunted Eiseheim merely ups show’s ante, seeming to bring the back the dead and threatening the social and political order. How much is ruse and how much real?

Burger’s gift is an understanding of both civility and civilization, whose bittersweet tones he manipulates believably, never falling back on special effects. Instead, awe is broadcast through people, faces and circumstances. Add to this a vivid Philip Glass soundtrack, allusions to the invention of moving pictures, and a charming if predictable kicker, and the result is a many-colored bird in hand. Based on a story by American fabulist Steven Milhauser.