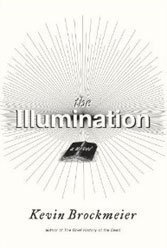 Brockmeier’s novel operates in the spirit of one of his favorite things: The Rube Goldberg Device, that homemade marvel of a machine that makes simple things wondrously complicated by inducing a fabulous string of oddball and noisy chain reactions. In the end, though, enticing a. to reach b. through x., g., o., l. and r., while entertaining to maker and watcher alike, puts diversion ahead of destination. Welcome to the dilemma, or “The Illumination,” whose whole doesn’t stand up to the whirring of its incidentally connected parts.

In the present day, a woman — Carol Ann — cuts off a piece of her thumb and light comes pouring from the wound. All over the world it’s the same. Wounds and pain leak light for all to see. Hurt is illuminated. People are in awe, briefly mesmerized, but soon incorporate the glow into the mundane.

Point a. then moves to point n. In the hospital, Carol Ann receives a parting “gift” from a fatally injured woman. It’s a diary inscribed with daily professions of love from her husband. The diary becomes Brockmeier’s talisman, changing hands six times through the novel — including an abused boy, a reluctant evangelist, a lonely novelist, a homeless man — with the lives of each of its possessors in some way touched.

The abused boy believes that objects have feelings, thus for him the wayward and mistreated diary is sacred. The unconvinced evangelist, who by chance survives many earthly disasters, and is captivated by way love fits with pain and light. The novelist, addled by mouth sores, borrows from the diary’s passion to maintain faith in her own. She hopes one day to kiss again.

These pained and glowing people, accidental recipients of the diary’s universal “I love you’s,” are Brockmeier’s torchbearers in a childlike novel about humankind’s fragile relationship to hurt and the act of giving. Toward the end, a scientist concludes that light is “effectively immortal,” which in the context of the novel means that pain’s suddenly visible radiations are a life force, an affirmation, something ineffable.

Though Brockmeier’s prose brims with heartfelt decency (bordering at times on hair-shirt reverence) and while the “I love you because…” diary is a sweet conceit, there’s simply too much randomness, too much cleverness, and above all too much simplicity made complicated. The device gets the better of the fable, stranding characters on many beaches, and that’s a soothsayers downfall.