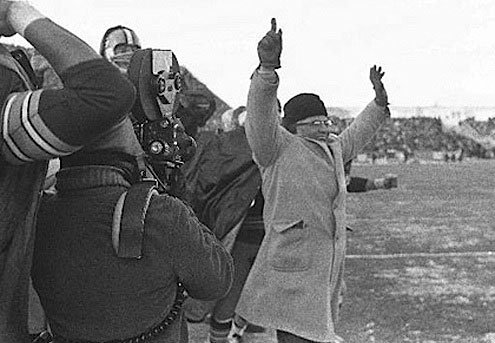 Bart Starr sneaks in, above, and Vince Lombardi exults.
I

t’s in the details: In the stands, midwesterners dressed in vestibules of flannel. On the field, men clumped in meaty bunches, their Stalingrad eyebrows frozen, their grunts emerging in white puffs, like air on fire. Optimists, the players tried blankets to warm their bulky legs — in vain because the blankets hardened. Garbage bags followed. View the film and you’ll see the ragged plastic flapping. Most everything was covered in ice.

My father, 68 at the time, was no fan of sports. On a slow Sunday he sought a political program with a sonorous theme — which in 1967 would have covered the diminishing returns of the Vietnam War and the fate of President Lyndon B. Johnson, the big Texas Democrat who had grown overwhelmed by a protest society he no longer knew enough to understand, let alone contain. The draft had undone him. Three months later, Johnson would withdraw his 1968 candidacy and sulk into semi-retirement.

But we had no crystal ball.

It was December 31, 1967 and my father’s trawling for black-and-white insight among the three available channels (NBC, ABC, and CBS) brought us instead to the National Football League championship game between the Green Bay Packers and the Dallas Cowboys.

Under most plausible circumstances, he would have ignored it. It was the announcer that changed his mind. The outside temperature at Lambeau Field in Green Bay, Wisconsin, he said, was 12 degrees below zero. Not below freezing, zero. That’s –24 degrees Celsius. Extremes seduce depressives.

There was also a swirling wind — this in an era where no one knew what “wind chill” was. The heating system beneath the field wouldn’t work; too cold. When official Joe Connell blew the opening whistle the flesh of his lips stuck to the metal. He tore it loose.

Sports broadcasting was in its infancy — three or four cameras, not three or four dozen, were used — but the tribulation of the players was clear. They moved through a slowing fog. “Folks,” said the announcer, “you’re watching something you won’t see again.”

“Good God,” muttered my father. “That is terribly cold.”

Hyperbole gains on triviality in time, but not this time. No championship game has since been played in such hostile conditions.

I never before watched sports with my father and never would again. Then again this was offbeat, a parting ode to a warrior class whose colorful burlesque now begs rich recompense. Four decades ago professional football players were modestly-paid, occasionally eccentric gladiators. Many disparaged the Super Bowl, an early sports marketing venture then only a year old — Green Bay won the first two installments. The game has since evolved into American cultural institution.

But the Ice Bowl world was innocently aloof from hype.

Despite the freeze, Dallas Coach Tom Landry, a disciplinarian, refused to let his players wear gloves, worrying about their ability to grip the ball. Green Bay Coach Vince Lombardi discouraged woolen underwear; it could hinder lateral movement. Today’s celebrity athletes might well have balked at playing the game at all — too risky. Or the league, ultra-sensitive to matters of health (and law suits), might have intervened to postpone it.

Which makes the sustained quality of play all the more remarkable.

With 16 seconds left, Dallas led by three points, 17-14, when Green Bay tried scoring on fourth down. By late afternoon, the wind had stiffened and the temperature had dropped to –22, some said it peaked at –25. The Green Bay quarterback, an elegant man called Bart Starr, lunged forward and the Packers won the game, 21-17.

We knew without saying that we’d seen something no passing year could take from us.

And so it was, and is, in that once-upon-a-time that is memory at its best.