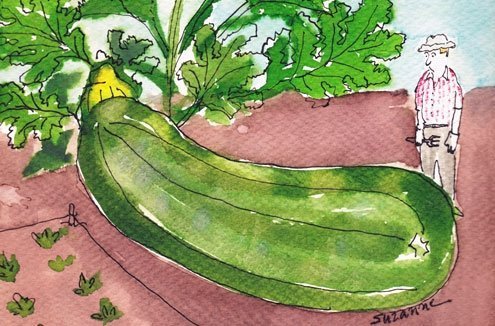 Pleasing all, or trying, with some variations on zucchini. Drawing by Suzanne Dunaway.
W

ell, I did it. I cracked. You’ve heard me rant and rave before about the importance of not bowing down to picky eaters among family and friends. You’ve heard me insist how important it is not to pander in the kitchen and make what you please for family, guests, even for dinner parties. If people who arrive unannounced don’t like it, give them the address of a good restaurant down the block (politely, of course).

Maybe I had a reality check coming.

This summer, my family arrivals came in two groups, with friends included. Both announced eating requirements that could make your head spin, if your head is so inclined. Mine happens to be screwed on securely to my neck and contains many thoughts and opinions on the subject of who eats what and when and how, with great resolve to continue on my unwavering path.

My response? To create one dish — plus salad and dessert — that would satisfy them all. Who made up the “all”?

Subgroup 1: Those who never have and never will (it seems) allow fish or shellfish of any kind to cross their lips.

Subgroup 2: Vegans who gave in occasionally to mozzarella-filled supplì and pasta with Parmesan (the making of which has something to do with a cow’s stomach).

Subgroup 3: Straight-out vegetarians, some of whom, oddly enough, didn’t like salad of any kind, eschewed some vegetables but also on occasion succumbed to shellfish if allowed into the kitchen when seductive fish stock was simmering.

On the first of several meals with the visitors, I turned to a three-kilo zucchine that was several days past its use-by date but was still firm and lovely inside (being a Burpee hybrid). I’d seen it on my kitchen counter and wondered how on earth I could transform it into something exquisite.

The zucchine did the trick. But that was only step one. The next gatherings included 11 to 15 people, including two small children whose tastes were still in the pasta with sauce and French-fries stage plus a couple of new arrivals who insisted on tomatoes being peeled and seeded before ingestion.

I managed like a mensch for the first four nights, dishing out pasta with fresh tomatoes, almonds, basil, garlic and Parmesan. I also made spaghetti with pesto alla Genovese from garden basil and a bit of milk.

But on the fifth night my resolve crumbled. I suddenly realized I’d been leaving us — my husband and I — out of the equation for too long. I missed the seafood I love so much. I missed the crunchy cold salads I crave in summer and the succulent roast chickens I get from the local open markets.

I went about making risotto with scallops, tiny bay shrimp, saffron and mint – sure in the knowledge that a pre-made, all-vegetable delight, escalivade, resided somewhere in the fridge along with eggplant caponata and a cheese spread for appetizers that takes about five minutes to whip up. As for the tiny mouths that wanted only pasta and sugo, okay, okay, I told myself, that’s easy enough — boil water, the sauce is made, what’s to slave over? But by the end of the prep time, I saw that I’d made not one, but three different dishes for various tastes and beliefs. All the resolve in the world has fissures. So be it. I’d cracked.

Time with step-kids, grandkids and their friends, I decided, was more precious than my unbending principles. And I love to cook. I love to create when faced with a challenge. I love surprising so many kinds of eaters with something they might not have had before in their limited repertoires. By slipping away from my rigid position of not cooking individual meals for guests I realized I was more human than I thought.

I broke my cardinal rule and I’m still in one piece. Just don’t push your luck! There’s still that restaurant down the street.