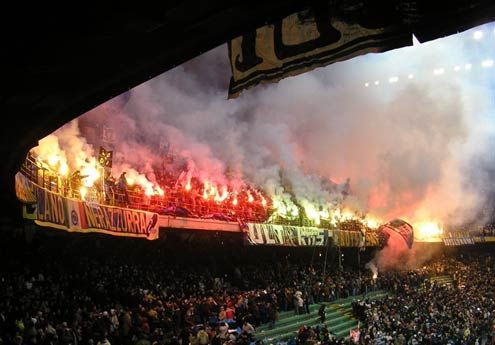 Soccer passion peaks volumes about the state of the country and where it might be headed.
A

t the risk of sounding too American, recent events in Italy are discrediting the belief that calcio matters.

In case you missed it, in November a group of Lazio ultràs (a fraternity-type coalition of a team’s most devoted supporters) stopped at a roadside convenience store where they encountered a group of Juventus ultràs. Words escalated and eyewitnesses claim that a brawl developed in the parking lot. This prompted a police officer stationed across the highway to fire two shots across four lanes of traffic. Officials claim the officer fired into the air as a warning to scare the group. Others maintain that he intentionally aimed at the men. What is known is that one of the bullets found its way into the neck of 28-year-old Gabriele Sandri who died instantly.

As word of the tragedy spread, fans throughout the country translated Sandri’s death into a declaration of war by the state against all ultràs. Naturally, chaos ensued.

In Bergamo, Atalanta ultràs removed bleachers and unearthed a metal grate, shattering a bullet-proof barrier inside their team’s stadium. In Milan, 600 Lazio fans marched downtown shouting “Assassins!” and hurling rocks at policemen and reporters. In Rome, hundreds smashed windows and set a police car and bus on fire before launching fire crackers across the Tiber River. Forty police officers were injured and La Dolce Vita lay trampled under guerilla warfare.

Several days later in Sardinia, I passed 100 high-schoolers gathered outside the Unione Sarda newspaper headquarters. Many didn’t seem to know why they were there. Others were text messaging. One guy had a blow-horn. “The truth for Sandri!” he cried. Like much of Italy, the mass was caught somewhere between confusion and outrage by the riots. No one could pinpoint exactly why Sandri’s death had incited the country to lash out viciously against the state — not even the reporters. And that’s exactly the problem.

The Italian media portrayed Sandri as a martyr lost to a dark side of calcio that Italy has yet to curb. Writers suspected that years of tolerating ultràs had only exacerbated stadium violence. They questioned the police officer’s background. They even reprimanded the referee in the Atalanta game for waiting seven minutes before canceling the match. The country was ready to point the finger at anything and anyone except itself.

The truth is that Sandri’s death had nothing to do with calcio. But the uprising that followed speaks volumes about the state of the country and where it might be headed.

Despite Italians’ apparent self-assuredness, the population is suffering a crisis in confidence. Many feel increasingly disenfranchised, yet fearful of reform. This feeling of helplessness is especially true among younger working class Italians — the demographic that typifies most ultràs. The very idea of ultràs organizations is rebellion against the state. In Cagliari, ultràs call themselves “Gli Sconvolts” (“The Upset”). They profess their defiance in tags throughout the city and are viewed as bandits of sorts. This is what draws Italian youth to identify with them. Calcio is merely a lightning rod.

Ultràs aren’t new to Italy, but their anger may be more justifiable now than ever.

According to The Economist, Italy’s rising national debt is among the highest in the EU, and its GDP growth is among the weakest in Europe. Its population is ageing, its quality of life is slipping, and its future is uncertain.

Italians cling to a delicious lifestyle, but it seems unlikely that Italian youth can sustain it. With Italy’s median age projected to reach 50 by 2035, Italians may inevitably be dragged into a 40-hour work week to afford the higher taxes and public spending that accompany a population of retirees. And since many people are willing to work more than Italians are, at some point a nation synonymous with bureaucracy must adapt its idea of social entitlements to compete with a modern world.

When a Roman woman was brutally attacked by a Romanian immigrant in the weeks preceding Sandri’s death, an outpouring of resentment against migrants swept across the country. Suddenly, immigrants not only came to represent dangerous new threads in the Italian social fabric, but everything that was threatening the country.

Ironically, during the witch-hunt against immigrants, riots engulfed the country and the perpetrators appeared to be none other than hundreds of young Italians. Many label the ultràs who revolted following Sandri’s death as “thugs,” but I suspect they were merely alienated youth who look towards an uncertain future with anxiety. Sandri’s death was merely the spark that set tempers ablaze, but it should serve as an alarm for a country hesitant to look at itself objectively in the mirror. If Italy’s morale is to be salvaged, it can’t afford to sip cappuccinos while the rest of the world hops a Vespa and rides off into the 21st century.