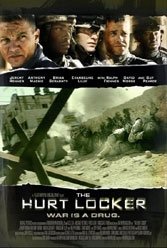 Director Kathryn Bigelow’s Iraq movie is a gripping but finally unsatisfactory concoction. It’s 2004 in Baghdad. Staff Sergeant William James (Jeremy Renner) joins a three-man bomb squad that’s just lost its top tech to an roadside explosion. An adrenalin junkie, the chain-smoking James is bravado’s best friend. The film’s first 30 minutes are a superbly paced homage to his audacity. “This doesn’t have to be a bad time in your life,” a colonel tells one of the bomb specialists, Owen Eldridge (Brian Geraghty), who disagrees and invites the colonel to see them work up close. The colonel unwisely accepts.

Bigelow’s Baghdad (the movie was shot in Jordan) is a ominous mix of begging children and crippled cats to which the blue-eyed Renner brings a vulnerable bravado. He’s like a young Clint Eastwood merged with the new 007, Daniel Craig. His eyes are those of Malcolm McDowell in a “A Clockwork Orange.”

But just as Bigelow (“Point Break,” “Strange Days”) anchors the tripwire tension, she inexplicably chooses to pushes the weary troika toward a rite-of-passage desert incident in which they’re briefly paired with an ill-fated British team (Ralph Fiennes and Guy Pearce in distracting cameos). Here the narrative not only stalls but squanders much of the dramatic tension cranked up in the bomb scenes. Suddenly, Bigelow wants you to know “Wildman” James has a young wife and child back home; that he’s a decent man; that his fellows, veteran Sergeant JT Sanborne (an excellent Anthony Mackie) and Eldridge, all at the end of one-year tours, are at reason’s edge.

As Renner is shoved further into death-wish city, Bigelow picks à la carte from a war-is-hell menu, madness as the main course. Renner’s the kind of soldier who puts bomb parts in under his barracks bed (“It’s all stuff from Radio Shack,” he says.) Still, he can’t get enough of it.

When Bigelow puts her bomb-breakers through their early, surreal paces, the movie soars. They look and feel like electricians of the apocalypse. When she’s sincere, it stumbles. David Morse gets a brief but nasty Robert Duvall-style “Apocalypse Now” turn as Colonel Reed.