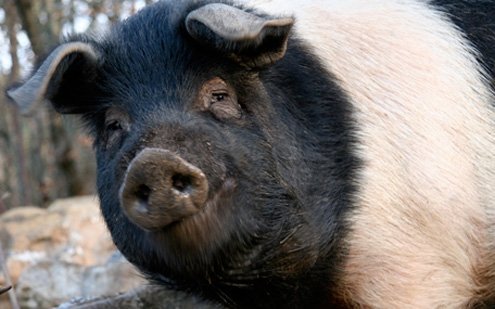 With luck, a Cinta Senese…
S

omething about which I know zilch is about to happen in a kitchen in Tuscany. Well, to be truthful, I do know a little zilch because I am first in line to provide food for a dozen guests who are convening from San Francisco, Vancouver, Los Angeles and Suffolk, England to eat, drink and make merry at a friend’s villa in the Tuscan hills. Two of us have not seen one another for 30 years.

Now, I am not a house-party girl. I usually like visitin’, as they say so charmingly in Texas, tête-á-tête — or in smaller groups. But many of these old friends live in distant lands, and the Tuscan gathering is a way of briefly bringing them together — after which we’ll go back to our separate lives and email correspondences.

I have to admit, I organized this crazy thing.

Piece of cake, I said to myself. We have two restaurant owners, two ex-restaurant owners (all of them chefs or cookbook writers, including me), three extraordinary dinner-party-every-week cooks and yet, as the provider for the opening night’s dinner (there will be seven nights in all), I feel a bit like the first act in a local talent show!

As very old friends, we’ve all dined together many times, but not for some time. Now, we’re really looking forward to what’s each of us has been cooking over the last two or three decades.

Still, nervous Nellie here has debated one recipe after another. Should she serve meat or fish or chicken? What about preferences, aversions and allergies? Come to think of it, none of these food lovers has ever mentioned food hassles.

I guess we won’t starve.

But just imagine a week of meals with a different cook creating his or her favorite food each night. Two very serious chefs (one of which was my cooking student a gazillion years ago) have mysteriously kept their planned menu to themselves, and another couple (including a cookbook author) is coming from Panzano, where their good friend, Dario Cecchini, the crazy butcher, will probably have provided them with god knows what from his famous meat shop (another mysterious menu to ponder).

The ones from England are masters at roast lamb or Gloucester Old Spot (a beautiful striped black and white pig) slow-cooked in their AGA, but they’re playing their cards close to the vest.

Maybe everyone is hoping to eat out! Maybe they’ve all become vegetarians (with all due respect to those wholesome eaters) and we’re in for tofu zucchini and soybean steak surprise. Maybe they’ve given up cooking entirely and expect The Organizer (guess who?) to put on the apron each evening for the Dirty Dozen.

Which I would gladly do, loving all of these people as I do, but am I the only one who knows what she’s serving on Day One? Lordy, lordy, I hope not. I can’t help but thinking about some of the exquisite dishes that have come from their kitchens in the past: fried eggplant with rosemary and honey; bitter chocolate tartlets with whiskey whipped cream, anything roasted in the oven the way the Suffolk duo does it (I don’t think you’ll find the black and white porky in Toscana, but maybe we can wrangle a Cinta Senese instead for them to work wonders on…)

Why, oh, why am I fretting so over this? It’s not really the food, it’s the meeting of friends from so long ago (Will we be really different? Will we know one another?). It’s also the management of that many people all wanting to do a hundred different things like exploring Toscana and visiting open markets or maybe just sitting in front of a cozy fire with a glass of wine, or in my case, a cold martini and having the pleasure of getting to know one another again.

Yay, I just received an email from the villa owner who says she’ll be the handler for us all! She’s used to it, she says. Hurrah, a reprieve.

I just hope to heck the (maybe) vegetarians don’t try to substitute kale balls for the six olives I love in my (gluten-free?) martini. Stay tuned for next month’s full report.