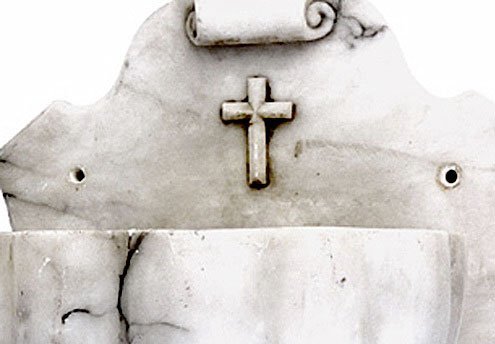 What may be considered the social norm in one country can be deemed the height of insensitivity in another. So while we Anglo-Saxons — not to mention the Scots and Irish — think it’s only right and proper to send our loved ones off with a bit of a party, the only thing that can be imbibed at an Italian wake is a short dark coffee.

Which is all very well if you happen to have had a hearty breakfast and live round the corner. But if you haven’t, and you don’t, it can turn into a bit of an ordeal.

In Italy, funerals are marathon affairs, as I found to my cost once when my husband’s uncle died in Naples.

Now I know this probably sounds extraordinarily callous, but my abiding memory of that occasion is of being absolutely ravenous. It’s true: I was expecting our first child at the time, and as anyone who has ever had a baby knows, there are times when you just have to eat. But no one had prepared me for the long drawn out wailing and breast-beating — a ritual repeated by family members every time a new mourner arrived.

Nor had anyone bothered to tell me that it would be strictly forbidden to let anything whatsoever pass one’s lips.

The whole sad saga had started the day before when we thought we were going to visit the poor man in hospital. But in what strikes me as a staggering lack of tact, a badly scrawled note pinned on the door of the ward informed us that we were too late and that the patient was deceduto.

Next stop was the chapel of rest where, being of a squeamish disposition, I did my best not to look at the open coffin. Word must have spread fast, and soon, as a seemingly interminable procession of friends and relatives arrived, each time signalling a new bout of crying and despair. For the first hour or so, I was sobbing with the rest of them.

But as the day wore on I’m ashamed to say my thoughts turned increasingly to food. Incredibly, in a country where eating seems to take up a good part of most people’s time and thoughts, no one else seemed the slightest bit hungry. Not even the not-so-close mourners, who might have been forgiven for feeling a slight pang.

At last, when I was close to fainting, my husband shame-facedly whisked me round the corner to a bar and bought me a big panino (for the record, I have to tell you that he also had one himself). Then we ate some of those delicious little pastries made of ricotta and salame that they do so brilliantly in Naples.

As we guiltily stuffed our faces, he explained to me that in Italy, grief is such an overwhelming emotion that it makes eating impossible. Hmmmm. More to the point, he said, between mouthfuls, it is considered very bad form to show any desire for food or drink. The whole exercise in abstinence was repeated the next day, when the funeral was held. This time, I had taken the precaution of having a cappuccino and a cornetto, a wise move, as it turned out, as there was not a crust of bread in sight.

Hunger aside, the other thing that struck me was the speed with which the poor uncle was dispatched.

Within just over 24 hours of breathing his last, his family had somehow found the time to notify all the dead man’s friends and acquaintances, organize several of those huge wreaths made out of gladioli and palm leaves, arrange to have black edged posters stuck on walls and lampposts throughout the neighborhood, order a coffin, book the priest and the church for the funeral and move heaven and earth to secure a place for him in the local cemetery — now so over-crowded that only those with the right connections and enough money have any hope of finding a slot.

That is no mean feat in a city where it can take several weeks to get your garbage collected. And for someone from a country where a week can easily pass between the demise of a person and his burial, it all seemed rather rushed. It’s true, the climate is very different here, though it must be said, the Neapolitan funeral took place on a cool day in early Spring. And I know that Italian friends think it strange that we wait so long to say goodbye to our dear departed. They would be horrified to see how many sandwiches, cups of tea and stronger brews get consumed at the average British funeral. But I have a sneaking suspicion that they wouldn’t hold back for long.