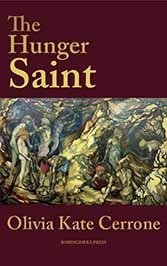 Olivia Cerrone’s “The Hunger Saint” is an exquisitely written, vivid, and engaging novella about the carusi — Italian boys exploited by the early 20th-century Sicilian mining industry. We follow Ntoni, one of the carusi, on his treacherous journey from vulnerable child with “bones bendable like mice” to scheming adolescent and expert demolitionist who ultimately devises his own escape.

Ntoni is a quiet, astute, and impressionable boy of 12 who takes on the role of breadwinner after his father dies in the Miniera Cozzo Disi mines. Ntoni must work because of the so-called soccorso morti, a loan given to families in exchange for underage labor. He goes willingly, eager to make sense of what the village priest tells his family — how his father’s soul is trapped in Purgatory because he was unwilling to attend Mass. Ntoni searches for his father in the mine with San Calogero prayer card in hand, believing that Purgatory is accessible through one of the tunnels. But in lieu of a sign from his father, Ntoni witnesses a brutal act, one of many in this vicious underworld.

Cerrone’s prose is strikingly honest and distinct; she intricately and patiently portrays the details of underground life, its “thick, airless heat” and “great plumes of bright yellow smoke [wafting] up from the open-air furnaces, forming clouds thick enough to obscure the sun.” We seek refuge alongside Ntoni. As with all heroic stories, there must be a sanctuary, a place of respite and invigoration, a magical place where new ideas can form, and this place is Ziu Peppi’s shop: “[Ziu Peppi’s] workshop housed a secret basement where he kept a cot and a large glass cabinet full of rare minerals, books, and antiques. He’d asked Ntoni to keep an eye out for any choice pieces of minerals, particularly the celestina stones. The slightest mention of the secret collection made Ntoni smile. Now a heaviness lodged inside his chest. What he really wanted was to curl up in a corner somewhere and sleep.”

Ziu Peppi is a mechanic who can read and write and helps illiterate miners transfer abroad to better lives. He gives Ntoni both consolation and hope. But just when it seems he has an out, all comes literally crashing down. This is when Cerrone displays her storytelling skills and creates a plot sophisticated enough to fully develop her hero as he navigates disaster, devises alternative plans, makes necessary allegiances, and wins the favor of miner and superintendent alike. Cerrone’s story prizes resilience and the human spirit. If there’s a book apt to win an award, it is surely this one.

About the Author: Laurette Folk