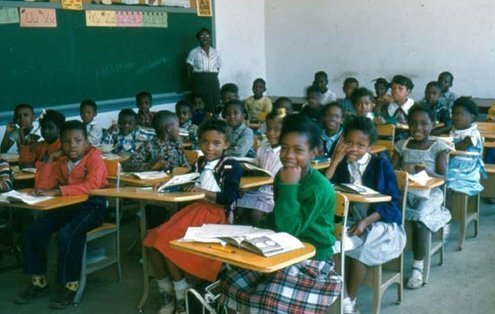 Marks School in Quitman County, 1955, a year after desegregation: bonding together.
T

he long Mississippi summer is a bonding experience for at least three reasons. The first is the heat. To be outdoors is to come upon a comrade in suffering. Even most dogs won’t step out of the shade at this time of year, making “dog days” something of a misnomer. The second reason is the mosquitoes. Itchy lumps on sweaty brows are birthmarks of the Southern summer family. In fact, “mosquito days” would be a good name for the weeks and months between June and September. The third reason is the only one worth stepping out of air conditioning: grilling.

Two years ago on July 4, I was invited to a cookout in the small town of Marks at the home of one of my wife’s colleagues and friends — an elementary school teacher whose family had lived in the area for generations. Though well into my third year of work with local black children and families, I still didn’t know local people very well. The cookout marked the first time I’d been invited to an African American family meal. We stood in the sweltering shade breathing in the sweet clouds that emanated from a smoker the size of a large truck.

Three hours later, beautiful racks of ribs, burgers and chicken were pulled off the grill, and hauled somewhere out of view. At first, I was salivating and confused. Why couldn’t we eat? Was I being punished for years of detachment from the families I’d worked with? Since I’m prone to what my wife likes to call “hanger” (hunger-induced anger), I finally made a move. “Hey,” I said, “this was a great hangout, but I think we’d better head home.”

The grill-master looked at me as if I’d gone insane: “What? Why? We’re just about to eat!”

I sat back down for another hour until all of us were finally beckoned inside to the kitchen, where the massive grilled feast had been laid out on a table. Someone grabbed hold of my hand. I looked around and realized we now formed a circle around the food. In all, some 20 people — the massive family, and us — were giving prayerful thanks for the stacks of meat before us.

Then I understood. I had always grilled food to eat fresh off the coals. Not this family. They grilled so they could assemble the food, eat it as a group, and bond. Food is remarkable that way. Bewildered and annoyed an hour ago, I now felt more welcomed than I could have ever imagined.

Ironically, the town of Marks, the seat of Quitman County, is what is widely known a “food desert,” one of many in rural Mississippi. The town is at least a 25-minute drive to the nearest fresh produce vendor. The dollar stores on the main road sell only canned and processed food, and at exorbitant prices. The poorest rural families are the ones desperately need of cars, insurance, licenses, and gas for no other reason than to get the nutrition necessary to sustain families and continue the tradition of uniting to break bread. More ironic still is the sight of countless acres of Quitman County farmland, particularly since its produce doesn’t end up in local markets.

Food deserts have a devastating effect on families. Children in these towns are 144 percent less likely to graduate from school, perpetuating a cycle of poverty. Food deserts also correlate directly to obesity rates. Mississippi has the highest percentage of obesity among youth ages 10-17, 22 percent. In Quitman County, the Center for Disease Control and Prevention estimates that 46 percent of adults are obese. It’s a vicious cycle. Health care expenses are massively high while food assistance programs are consistently reduced. All this as local families stare out at acres and acres of commodity crops eventually exported elsewhere.

In 1969, James Brown and Marva Whitney released a song called “You Got To Have A Job (If You Don’t Work, You Can’t Eat)”. Its frenzied dance beat and funky guitar riff showed the James Brown Revue at its energetic peak. It also demonstrated Brown’s uncanny ability to turn even a mundane message into an unforgettable refrain (the man could have read the nutrition label on his cereal box and made the world dance along).

But Brown was never much of a family man. He missed the point when it came to the realities of poverty. It’s not just Mississippi families that struggle to provide good and healthy food — and sometimes not even employment assures it.

Despite its shortage, perhaps because of it, food in Mississippi retains in its cultural role as a bonding agent.

As we held hands around the grilled bounty, we were one human family. Eating together was an expression of love. The assembled food, just because of its scarcity, had done as intended. It united us.