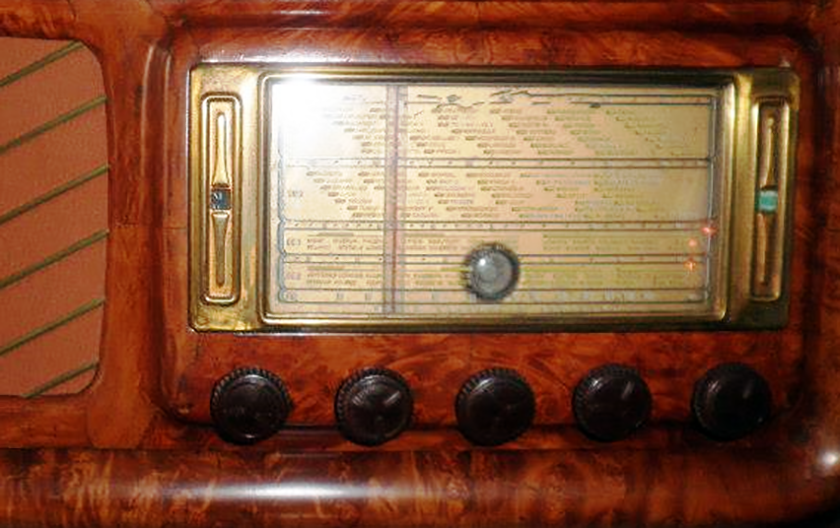 The author's old radio, which remains operational.
A

s a youth in the 1960s, I became intoxicated with listening to the wireless, as radio was called in its early days.

I was enthralled by that magic box from which voices would erupt, aired from the most distant corners of the world.

My father also was a radio enthusiast and enjoyed listening to night programs, operas in particular. My interest, on the other hand, was triggered by my passion for languages.

But when a majestic television set made its triumphant entry into our house, the old wireless was soon forgotten.

So I moved it into my room and spent most of my evenings switching from stations that broadcast in English, French, and Spanish. I often listened to Central European stations. One of my favorite was Radio Budapest, which broadcast an English program around 8 p.m. Just before it began, a soothing, well trained voice read the news in impeccable Italian.

It was all part of the political propaganda of the Cold War era, but I found it interesting and quite instructive.

More than 30 years later I met Pina, my companion. She is from Poggio Imperiale, in northern Apulia, about 300 hundred miles from my native Salento. One of the things she told me was a confusing story about one of her relatives, Zio Vincenzo Cosentino, her grandmother’s brother, who lived in Budapest, and died there in 1978, at 82.

Pina said that her grandmother would switch on the radio every evening to listen to her brother broadcasting from Budapest.

Pina said that her grandmother would switch on the radio every evening to listen to her brother’s voice broadcasting from Budapest. I was fascinated but no one in the family knew any of the details. Pina’s grandmother and both her parents were long dead. The only sliver of information I obtained was that lo Zio, the uncle, had married a Hungarian woman. Their daughter was still living in Budapest, but no one had ever met her.

I assumed that Cosentino, might have been an Italian radio correspondent in Budapest, so I got in touch with RAI, the Italian state broadcasting company. They had never heard of him.

The years passed, but from time to time I found myself thinking about this mysterious relative of my companion.

One day, sorting through the contents of some drawers, we found Cosentino’s daughter’s Budapest address. She was, of course, Pina’s second cousin. We had long deferred a trip to Budapest. Now it was time to plan a visit.

We wrote to the unknown Hungarian cousin and she replied immediately, thrilled at the idea of meeting us.

We landed in Budapest Ferenc Liszt International Airport at 2 p.m. on Dec. 4 2017 and took a taxi to the small flat we had booked well in advance near Oktogon Ter, in central Budapest, just a few yards from one of the stations of the historical Földalatti metro line.

The next morning we met Pina’s cousin and though Pina had never seen her before, she immediately recognized her. Family features were unmistakable. We went for a long walk in the city center and then to lunch at the Vak Varjú (the “blind crow”) kosher restaurant, in Paulay Ede utca, in the old Jewish quarter of Erzsébetváros, which takes its name from Empress Elizabeth of Austria, wife of Franz Joseph I, the last Austro-Hungarian emperor.

The goulash was excellent, the dessert exquisite, and so was the bottle of red Cabernet from the Balaton region. Pina and her cousin began talking the instant they met and did not stop until our visit ended, 10 days later.

Over lunch they exchanged family stories and the pictures they had brought along. I was moved seeing them happily conversing over food and coffee and ice cream, as if they had grown up together in the same Apulian village.

After lunch, while sipping a glass of Unicum, and later walking in the old town, we learned that Vincenzo Cosentino had left Poggio Imperiale in 1915, enlisted in the army at the outbreak of the Great War.

In late November 1917, the Austro-Hungarians broke through Italian lines. The rout at Caporetto (today’s Kobarid, in Slovenia) left 365,000 Italian prisoners in the hands of the enemy. Cosentino was among them. He was interned in Hungary.

Prison camps were already overcrowded, so many detainees were housed in city jails. He was sent to Márianosztra city prison. Free spirit that he was, he grew restless in detention. In the summer of 1918, he devised a plan to escape with one of his brothers in arms. The plan worked perfectly, only up to a certain point.

The original absurd idea was to walk back home through the Balkans to the Adriatic coast. It seemed easy on a map, but on the terrain, marching along byways, mostly in the night, in enemy territory, it was an altogether different matter. Without food and adequate clothing, his comrade decided to turn back after a couple of days.

Cosentino managed to reach the periphery of Budapest, 50 miles south, where he hid somewhere. Someone must have helped him, probably a woman. A few months later the war ended with the defeat of the Central Powers, but Cosentino remained in Hungary, and a few years later he married a local girl, probably the same one who had helped him.

He lived in Budapest for the rest of his life, teaching Italian as a tutor in wealthy Hungarian families, and working as an interpreter and a translator for local firms.

He rarely visited his home village in Italy, and when he did, he went alone. In Budapest, between the two wars, he became a member of Béla Kun’s Communist Party and during World War II, though convalescing from stomach surgery, he often went with his comrades to sabotage German telephone lines in the hills of Buda.

In 1956, he got a position as translator and broadcaster in the Italian service of Magyar Rádió, better known in the West as Radio Budapest.

The original absurd idea was to walk back home through the Balkans to the Adriatic coast.

It was his well-coached voice that I had heard so many times in my late teens. And after more than half a century I stood with his daughter and his grandniece in front of the building inside which he read the news every evening, while his sister listened to his voice in a faraway hamlet at the foot of the Gargano Mountains, in Apulia.

So the mystery was solved, and yet, I still hoped to know more. A couple of days later, riding on the No. 2 trolley along the right bank of the Danube to get to the Liberty-style covered market near Erszébet Hid (Elizabeth Bridge), Pina and I were looking at the map and guessing, in Italian, about the right stop. An elderly gentlemen sitting next to us said, in flawless Italian, that he could tell us when it was time to get off. He was a professor of Italian on his way to the college. Pina hinted about her “uncle” and his job at Magyar Rádió, and the professor asked, “What was his name?” And when Pina answered, he exclaimed, “Ah, yes, of course. Cosentino.”

As it turned out, he had briefly met him in his youth when he used to visit the Italian section of Radio Budapest to practice his Italian. I fumbled in my pocket for my notebook and a pen and got the professor’s phone number, just before jumping off the trolley.

We met him again the next day in a café near the Houses of Parliament. The professor put me in contact with some of Cosentino’s former colleagues, who were much younger than him and still living.

More stories emerged. And even now, four years since our trip, I am still busy writing them down, bringing an obscure past back to life.