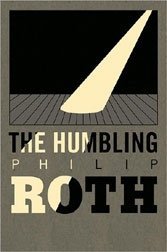 Roth’s latest ode to male twilight works quite well until it plunges into sex. After which it fornicates itself into embarrassment. Simon Axler, a burly and successful stage actor in his mid-60s, suffers a breakdown and can’t act. A stint in a mental facility doesn’t help much. Humbled, suicidal and dependent on his own self-loathing, he moves to a country house outside New York. There, he meets Pegeen, the daughter of old friends. Once, he saw her nursing. Now, she’s a 40-year-old lesbian suffering from an identity crisis that is far too vaguely sketched out. They begin an affair. Let the oral and anal games begin (“Yes, that’s it — squirt in her face”).

Roth dealt honorably and elegantly with “the onslaught that is the end of life…” in 2006’s “Everyman.” This time, however, he cuts his losses. The final sound is Axler’s curtain, dropping. It couldn’t come too soon.