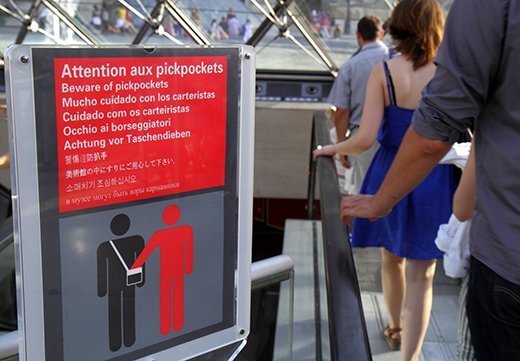 Incidents of pickpocketing have skyrocketed in Paris over the past five years. Here, a warning at the Louvre.
A

s sure as April showers bring May flowers, spend enough time traveling in Europe and someone’s going to pick your pockets. Take it from me. Or maybe I should rephrase that.

When it happened to me, I actually saw it coming.

I consider myself a streetwise traveler. One who doesn’t succumb to the cons of tricksters, street hustlers, and professional panhandlers. In Paris, I avoided so-called “students” with their petitions and clipboards. I didn’t buy selfie sticks, Eiffel tower toys, or bottled water from street vendors.

I was always on alert for pickpockets. I knew to keep my wallet in my front pocket. When a young, long-haired guy tried to pawn off a ring outside the Musée de l’Orangerie one fine spring afternoon, I recognized him for the grifter that he was.

“Sir, excuse me, but I found this on the ground. Maybe it’s yours? Maybe you dropped it?” He then tried to put the ring in my hand.

“No, it isn’t mine. Pas de moi,” I replied brusquely, continuing to walk.

“But maybe you could give me €20 for it. Look, it’s real gold. You could sell it for much more than that.”

“If it’s that valuable, why don’t you go hock it yourself?” I shot back, brushing him aside as I entered the Jardin des Tuileries.

“What’s going on?” my dazed friend cried. I waved them off, but they swarmed around us like flies.

So, you can imagine my chagrin when I was duped by a pair of hustlers in a Parisian Metro station. I was with my girlfriend at the time, and it was her first trip to Paris. I was her tour guide and out to impress her.

The two of us were taking the RER from Charles De Gaulle airport to our pied-à-terre on Avenue Gambetta. The place bordered on the north side of Pere la Chaise cemetery. It was her dream trip, and I was determined to dazzle her at every turn. I wanted her to see what a savvy world traveler I was. After all, my one previous trip had filled me with in-depth knowledge.

But from the moment we got off the plane, health problems began, and she was hit with waves of nausea and dizziness. I was no help trying to figure out how to operate the vending machine to buy train tickets to Paris’s Gare du Nord as she sat on a bench hunched over with stomach pains.

I gave up on the machine and queued up to speak to an information agent, got our tickets, and went back to my girlfriend. I made sure she had water, checked her forehead, and told her she’d feel better once we got moving.

She seemed better during the train ride, and once in Paris, we navigated our way through Gare du Nord to the Metro. I could have sworn that the guy who’d sat across from us on the RER earlier in the day had followed us onto the Metro — and continued to even after we changed trains at Stalingrad. 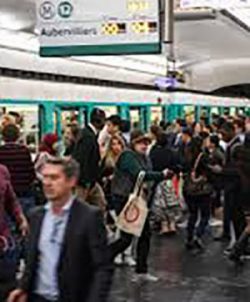 Systematically packed Metro stations and platforms are a playground for thieves, who often work in tandem.

When the car doors opened at Pere la Chaise station, this familiar-looking gent tossed some coins near the door entrance and bent over to pick them up, preventing me from leaving the car and separating me from my friend, who had stepped out onto the platform with her luggage.

I knew we were easy marks, with our luggage, and our jackets, and our conversation about getting from point A to point B. The guy must have overheard us and took us for chumps. I wondered if the coin toss trick was meant to separate us or distract me. I finally lost my patience and pushed him out of the way.

I told my companion what had just transpired and to be on the alert. I watched the coin-toss guy partner up with another man in a denim jacket and a colorful sweatshirt. We let them move away from us on the platform until they climbed a flight of stairs.

We went up the first flight of stairs without incident and stepped on to the escalator. My friend was two steps up from me, our luggage between us when we were beset by the two men. They were trying to grab at the handles of our luggage, pretending to offer help.

“What’s going on?” my dazed friend cried. I waved them off, but they swarmed around us like flies.

Finally, at the top of the escalator flight, the men walked off. We checked our belongings. Our luggage seemed secure, and my friend’s purse was intact. But my wallet was gone.

“Shit!” I yelled, “They took my wallet!” I started to run after them, but they’d split up and gone off in different directions. Meanwhile, my companion was standing next to a fruit kiosk, shaken and bewildered. What the hell was I doing chasing after these guys and leaving her all alone?

Catching my breath, I tried to compose myself. “We have to find our apartment,” I said, “then I’ll report the theft.”

I was with my girlfriend at the time, and it was her first trip to Paris. I was her tour guide and out to impress her.

We got above ground and headed toward the Avenue Gambetta. My companion’s first impressions of Paris had been tainted by what had just happened and my panicked reaction to it. I was disoriented on a street that I was very familiar with and loved.

I went off in search of our apartment while my friend stood on the sidewalk of the Place Auguste Metivier, surrounded by the sights, sounds, and aromas of Paris, confused and shocked and wondering whether she should jump on the next flight home.

I made calls to my credit card offices, canceling all the cards and ordering new ones. I called our host, who tried to describe the building where we were staying. I was having a problem finding the street address. I walked into two building lobbies thinking I’d found it. I was wrong each time. My phone’s battery was dying, and I was on the verge of giving up.

What a great way to start our adventure of a lifetime.

I finally got put to rights and found our apartment and, after dumping the luggage, found my friend. I sat with her as we considered our next steps. I had no money. No credit cards. No ID except for my passport. She had some cash and plenty of credit on her cards, which we’d have to rely on until my replacements arrived.

But before I could cancel them, the thieves had racked up over a thousand euros in transactions, mostly money orders and train tickets, and what looked like several pairs of expensive sneakers. Thankfully, I had anti-theft and fraud protection. The charges were canceled.

I went to the nearby gendarmerie on Gambetta, dutifully filed a report, and returned to our apartment overlooking the cemetery. Finally, I could relax and get ready to enjoy the rest of our vacation. I could now be my companion’s seasoned tour guide, albeit a chastened one.