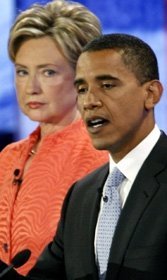 verkill isn’t the word. Numbing is closer. The Obama-Clinton Democratic face-off isn’t a story; it’s the only story. All weigh in. All have opinions. Each new primary scrambles American adrenalin. Or seems to.

Perspective may be useful.

What’s winning is the instantaneous. What enthralls is the pleasure of immediacy: charges, countercharges, missteps small and large. Obama-Clinton has turned into a metaphor for a country’s pluralistic squabbles. It’s a hyperbolic soap opera in miniature, a November prequel with a strong cast. Every result is “crucial,” ensuring the word means nothing.

Since May’s first few days are slow (until the May 6 Indiana primary), accumulated acrimony is milked for fresh episodes. Obama is ahead, or is he? Hillary trails, or does she? What about working class voters? Obama has “transformational” style but no substance (yet isn’t style a form of substance?). Hillary is pretty poison who doesn’t know the word quit. Gender. Race. Big states. Small states. Delegate counts. A carnival of fascinating details rivets a country aroused by divisions and statistics.

But none of it matters.

Let me rephrase: None of it will matter objectively by the summer’s end.

By then, the presidential race will involve Obama or Hillary and John McCain, and the residues of a bad April will have been largely archived. Whether the nomination goes to Obama or Hillary, they’ll each have to live with the phrase, “who survived a brutal nomination fight” — unless they team up, which is unlikely.

But that — ladies and gentlemen — is it. There will be no race rage if Obama is denied or gender fury in case Hillary falls short.

The U.S. presidential campaign is the greatest political soap opera on earth, a four-month escapade that makes its own reality and dispenses with yesterday and last month in favor of tomorrow. McCain and a Democrat will take their places. New crises and scandals will emerge. Create a media-happy society that depends on celebrities and politicians for vicarious drama and the Obama-Hillary circus is irresistible. Presidential politics is American Idol-style entertainment for the masses. Salons heatedly debated candidates a century ago, so that’s not new. Mass participation is. Disengagement is impossible. Email makes the pre-campaign into daily chi-chat.

In foreign countries where knowledge of the American system is marginal or irrelevant, some believe the presidential choice is already between Bema and Clinton. John McCain, out of media sight, is for now out of public mind.

This Democratic nomination fight, more than most, is a carnivores banquet, enfranchising but exhausting. Which is why conventions exist not only to endorse put to provide a venue for burying hatchets. This burial may be more awkward, and politically costly, but it’s not likely to challenge the dark primacy of the 1968 Chicago convention, where ill will moved from the convention hall into the streets. Police coaxed to frenzy by Mayor Richard M. Daley bloodied antiwar protesters while Norman Mailer took madcap notes.

In short order, Bobby Kennedy had been shot and several candidates nastily discredited. The man who emerged from the Democratic fracas, Minnesota’s Cheshire cat-like Hubert Humphrey, was given little chance against Richard Nixon.

In fact, Humphrey put Nixon to the test. He was foiled by Alabama Governor George Wallace, whose independent bid won the traditionally Democratic south. Wallace, a charismatic bigot, earned 46 electoral votes and 13.5 percent of the national vote, arguably the most impressive postwar run by a third-party candidate (Ross Perot didn’t win a state in 1992).

The primaries — there were admittedly fewer — represented a footnote to all this. Among Democrats, antiwar candidate Eugene McCarthy captured the popular vote (about 3 million) to Humphrey’s 166,000 (putting him near dead last). But convention bosses transformed McCarthy into road-kill. Among Republicans, Ronald Reagan won the popular vote but lacked Nixon’s party connections. Reagan had to wait eight years for his next chance and 12 to become president.

Bottom line: It’s not even early in the game. The real game hasn’t begun.

Yes, the Obama-Hillary duel remains engaging and episode-worthy, but in its own framework. Is their paper cut squabble hurting the party’s chances? Easy to be sure of but harder to quantify. In September and October a week is a month. A debate one-liner can alter perception and turn a race on end. Undecided voters are excited by the latest turn of phrase.

Certainly Obama has lost some of his sheen and Hillary has demonstrated a prizefighter’s relentlessness. One will go down. Then and only then can the barkers begin their howling.