The House That Jack Buit 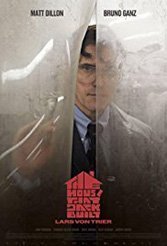 First, let’s avoid covering a climax gruesomely grandiose enough to warrant its own chapter. Let’s instead focus on the more than two hours of Lars von Trier in serial killer mode. After obliterating earth (slowly) in “Melancholia” and dissecting sex twice over in Nymphomaniac,” here is LVT gorging on a genre that to him hinges on dismemberment.

It’s the 1970s in the dank Pacific Northwest and drone-like Jack (Matt Dillon) is a loquacious serial killer (hello again, Dr. Lecter) who confides the details of his murders — “incidents,” he calls them — to a mystery man (Bruno Ganz). Jack’s carnal mangling dates back to childhood (he’s seen torturing a duckling) and later spills into a ritualized adult spree that LVT covers through flashbacks. Women are Jack’s favorite snack food, but children and men aren’t exempt.

Jack is something of a battering ram against all things righteous, including the moral high ground.

Still, LVT manages to take a Danish jab at current events by casting Harvey Weinstein victim Uma Thurman as the dumbest of all Jack’s kills and letting \ his opinionated killer mock America’s maddening failure to rein in guns.

Jack, in fact, is something of a battering ram against all things righteous, including the moral high ground. A failed if long-winded architect, his is a house of insecurities. Yet he’s also a detail-oriented sadist and his deadpan butchery ceaselessly unsettling (he takes victims to a stand-up freezer where gets to carving).

If only he’d just shut up, which LVT rarely allows him to, flirting instead with caricature. “Some people,” says Jack (warming up), “claim that the atrocities we commit in our fiction are those inner desires which we cannot commit in our controlled civilization, so they’re expressed instead through our art. I don’t agree. I believe Heaven and Hell are one and the same. The soul belongs to Heaven and the body to Hell.” Much of this film belongs entirely to hell. That said, only von Trierr could make it.