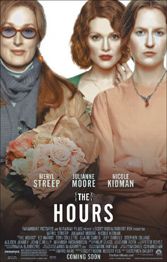 Clarissa, a lesbian, is obsessed with helping friend and gay poet Richard (Ed Harris), who’s wasting away from AIDS. Pregnant Laura wants to throw the perfect party for her husband to affirm the meaning of her marriage, and her own life. Woolf, meanwhile, is given to increasingly unbearable migraines and inched closer to the drowning the movie began with.

The art of interconnection is seamlessness. But this is not seamless. The portraits are fine but forced. Acting is excellent but evident. The film probes selflessness and selfishness yet falls short of knowing its own mind. That’s because its credibility and poignancy depend entirely on the sum of impressive but jagged parts.