The Hour of Bad Decisions 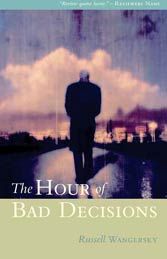 Fire is often the agent of decay. “Plum-colored flames,” flames that make “zipping sounds,” “volcanic fumaroles” imagined by the narrator of “Hot Tub.” When Jodean leaves firefighter Hennessey in the story “Mapping,” “dancing flame wrote a cryptic, blackened script message across a cream-colored garage door.” In “Perchance to Dream,” a happily-married man dreams of killing his family and flees, comparing himself to “a burn patient, absolutely raw.”

Wangersky’s book could be titled “men on the verge of a nervous breakdown,” so uncanny is his insight into the physique of male doubt. Casual sex following a Christmas party (“Dealing with Determinism”) unsettles Kevin, who returns home to his sleeping wife. “It felt to him that he had been painted, all over, with a special sort of paint that you couldn’t help but see.”“Bowling Night” begins with a burning car and ends with a laconic husband attacking police with a bowling ball because he can’t make sense of loss. In “Musical Chairs,” another Hennessey (variations on the same man) cuts off a finger for female attention. In “Hardwood,” the “fugitive grain” of lumber suggests a cheating wife. Men are always “one careless moment too late.”

Wangersky burrows into these moments with breathtaking intelligence and natural born subtly. The hour of bad decisions, it becomes clear, is 2 a.m., and these gorgeous stories honor its fraughtness.