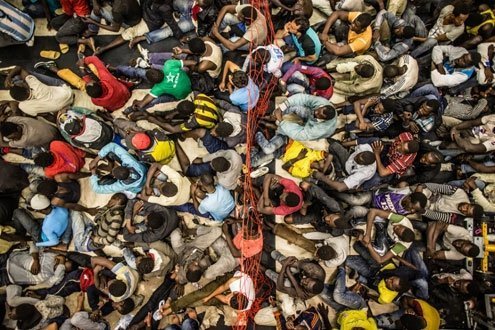 Making it to Europe comes at a cost.
T

en months ago I was on a train traveling with my wife from Manchester to London when she began feeling feverish. By the time we reached to London she was nearly delirious. Station staff helped me get her to nearby University College London Hospital where she was diagnosed with severe blood poisoning (septicemia) and placed in intensive care.

Her hospital stay was extraordinary in a number of ways. The medical care was superb. The staff was friendly, caring and efficient. But most astonishing to me was the friendly interrelationship among staff and patients who came literally from the four corners of the world: English doctors and nurses were supplemented by professionals from India, Africa, South America, Europe and the Middle East. Patient nationalities were just as eclectic.

Two weeks later, my wife returned home exhausted by her illness but awed by what she’d seen. She’d spent 14 days in a sort of utopia where all that mattered was human wellbeing. Nationality, skin color and religion played no role. We both felt we’d witnessed a version of the future based on integration, mutual tolerance, decency, and collaboration.

But we were soon re-introduced to the realities of the outside world, in which relationships are considerably more complex than a hospital setting and hated, fear and suspicion often divide nationalities and ethnicities.

A host of illicit activities threaten the functioning of society and civil relationships. War savages East and West Africa, putting states at risk. The Middle East has all but entered into a religious and tribal civil war reminiscent of the religious and ideological strife that wracked Europe for centuries beginning in the 15th-century. Asia faces its own separate set of tensions.

The ruinous economies of disrupted states have produced a grower refugee stream that some now estimate at more than 100-million strong. Most seek haven in Europe or the United States, but many also head for Gulf States, for Asia, for Russia.

I bring this up for a second time in three months because these ongoing wars are producing a spillover effect. Ferocious terrorist attacks have scarred the West over the last decade, the most recent on the Paris-based satirical newspaper Charlie Hebdo, an attack followed by two lethal stand-offs.

Since 2001, thousands of Europeans and U.S. citizens have died, and they may not be the last. The world is in flux. Internationally, several states no longer exist, at least not in conventional terms. Governments in name only run Somalia, Mali, the Central African Republic, and South Sudan. They have limited control over their territories and populations.

The Middle East and North Africa face the same dilemma. Pandora’s box wars in Iraq and Libya have pried the lid off simmering religious and tribal strife whose outcomes may change the region’s geography and balance of power. Libya, Iraq, Syria and Yemen — like its African counterparts — are states that exist only nominally. Lebanon, Bahrain and the Kurdistan region are also at risk. Even Turkey and Iran risk falling victim to sectarian war.

The consequence is an exodus. Since 2002, 10 million refugees have arrived in Europe — an estimated 600,000 alone in 2014, most of them crossing the Mediterranean hoping to reach Spain, Italy, Greece and Malta. Le Monde recently reported 275,000 dead in a decade of botched crossings.

Immigrants are increasingly targeting less patrolled European landing spots, including Croatia, Bulgaria, Romania and Turkey. The traffickers, often in league with political movements like ISIS, have begun using larger but marginally seaworthy vessels in an effort to take on more passengers. Some are cut adrift and left to run aground by fleeing crews. One such vessel, a livestock freighter towed to Crotone in early January, had 450 Syrian refugees aboard. The “passengers” netted traffickers around $2.7 million. As I’ve written before, other smugglers use Calais and English Channel ports to get refugees into Britain. Access to trucks and ferries is hazardous at best, leading to risk-taking, drowning and riots among those left out.

No promised land awaits those who survive. Jobs are scarce. Many are relegated to forms of semi-slavery.

A decade ago, 23 Chinese laborers — all illegal immigrants living in squalor — died in a riptide while harvesting cockles on a British beach. Recent statistics say their numbers have only increased.

In Southern Italy and Spain, seasonal tomato harvesters are little more than slaves supplied to local farmers by underworld organizations and paid next to nothing.

Even the sellers of trinkets and black market goods on Italian seashores live on the outer fringes of urban life, shuffling from one place to the next, often living 10 to a room.

The increasing size of the Muslim immigrant community in Europe and the tension its existence creates has similarities to the United States where poor Central and South American immigrants are being met with ever-stronger resentment, particularly in the American southwest. (Some U.S. states have erected barriers and passed anti-immigrant legislation).

Today’s West is like a gated complex whose members see themselves as under siege from the desperate citizens of failed and failing states.

If hospital life is one version of a answer, and an equitable one, life outside it has so far been unable to duplicate it. But the future of Western stability hinges on finding ways to include, not exclude. Day-by-day, month-by-month, it shapes up to be a choice between survival and decadence.