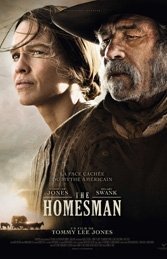 Few actors are as at home in Western settings as Tommy Lee Jones. He proves it again in this beautifully apportioned but deeply melancholy story of an aging opportunist — George Briggs (Jones) — who reluctantly agrees to help a stubborn, God-fearing Nebraska homesteader Mary Bee Cuddy (Hilary Swank) transport three women gone mad with grief from the depravities of frontier territory back to “civilized” pre-Civil War Iowa, where they can be sent back east to sanitariums.

Claim-jumper Briggs is in it for the money ($300), while enterprising Mary Bee, unable to find a husband, wants just to do the Lord’s work, and a man’s job. Together, they pack the madwomen into a wagon and set off, a fatalistic mercenary and a hopeful believer juxtaposed in a land where disease and death are a constant and few look back. Briggs calls Mary Bee “plain as tin, and stubborn,” when in fact she’s a fiercely strong woman in a primal universe only some women can withstand without capitulating to some form of lunacy.

Jones, working from Glendon Swarthout’s novel, constantly tinkers with the difference between how Briggs and Cuddy respond to Western duress, presented as a panorama of hardship and resignation that some believe only faith can reprieve. Frontier marriage is presented for what it was: an often-brutal contractual arrangement to keep the species alive.

Briggs will gradually grow a sense of conscience, toward Mary Bee and his “cargo.” But its price is high. So is that of decency, which comes and goes but never sticks. Jones and Swank are superb, the latter making Mary Bee’s chaste woodenness into an ambiguous virtue. Short stints by James Spader as a greedy hotel owner and Meryl Streep as the wife of a minister fortify a deeply elegant whole.

Jones is less interested in pace (it’s slow) than in mood, and the result is a poignant tapestry that makes the wry Briggs and pained, partner-craving Cuddy into believable frontier characters.