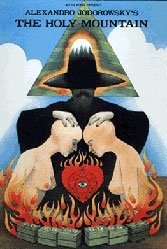 To make not one but several films about the quest for enlightenment suggests an obsession with the holy, yet no director’s taste was as gaudy and blasphemous as that of Chilean Alejandro Jodorowsky. For 1973’s “The Holy Mountain,” Jodorowsky supplied his actors with psilocybin mushrooms and asked them to spend three months training in Sufism, yoga and Zen meditation under the guidance of Chilean spiritual master Oscar Ichazo.

The results of the actors’ conditioning are as confused as a psychedelic head-trip. But it’s the confusion that makes “The Holy Mountain” a pleasure to watch. A man who represents the tarot card The Fool has just woken after a fall from a cliff, and wanders into a nearby city. The locals take advantage of his uncanny resemblance to Christ and use his body to cast lifelike wax models of the crucifix and sell them for profit. Disgusted by the false icons he has helped to create, the man looks to an alchemist to learn how he can transform himself into gold.

Jodorowsky dumbfounds with visual peculiarities up to this point. A lifelong seeker of enlightenment, he tripped acid throughout the film’s production (apparently at Ichazo’s request) and it shows. Although surrealism adds little direction to the narrative, the film stumbles into it willingly: birds flying from the bullet wounds of the dead, and a cast of frogs and chameleons reenacting conquistador Hernan Cortes’s bloody conquest of Mexico.

Stylistically, the film is violent and profane, but so are the religious materialism and colonization it criticizes. Later, when the alchemist introduces the man to seven powerful but misguided people (weapons and cosmetics manufacturers, a police chief, a millionaire art dealer), the need for such wild imagery is indisputable. Excessive costumes and sets reflect the excesses associated with each of the seven. Their gluttony inspires the alchemist to ask them to burn their money and follow him in the ritual of death and rebirth. The alchemist, the Tarot man, and the seven sinners journey to a mountain peak with hopes of becoming divine.

Despite its flamboyance, “The Holy Mountain” ending is as conscious of artifice as the last few moments of Ingmar Bergman’s “Persona.” In both cases, the cameras pan back to reveal the crew. For “Persona,” the shot expressed the maker’s inability to separate him or herself from the work; for Jodorowsky, it’s a way of begging the world to stop living within the construct of art and, instead, start living.