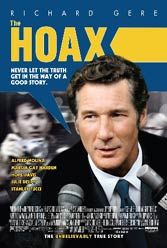 What seems like a trifle of a flick grows on you. This is the story of hack author Clifford Irving, who in the early 1970s forged a biography of reclusive Howard Hughes and almost got away with it. Director Lasse Halström (“The Shipping News,” “Casanova”) makes good use of Richard Gere as Irving and the underrated Alfredo Molina as his bumbling best friend and wannabe writer Dick Suskind.

Early on, the movie feels glued-together and stuffed with Nixon-era caricatures. Hallström overdoses on cleverness and Creedence Clearwater Revival (“Up Around the Bend”). He badly miscasts the excellent Marcia Gay Harden as Irving’s wife Edith. Then, mid-way through, something remarkable happens: Gere authoritatively seizes his character (a pathological liar) and makes him decay progressively with disturbing conviction. Molina’s inspired Suskind gives the decay a foil.

If the adolescence of the intro yields cliché, the second half presents a poisoned Don Quixote and Sancho Panza. As interested as Hallstrõm is in conspiracy (he, like Irving, seek to link the failed hoax to the Nixon White House), the real winner is Gere. His performance ably conveys the hapless and the shrewd, summing up Irving up as an amoral man deluded, he thinks, in all the right ways.

Gere’s ability to at once project lunatic confidence and bewilderment is stirring. It deserved a prize not won. Though on screen only briefly, Stanley Tucci is wonderful as publisher Shelton Fisher.