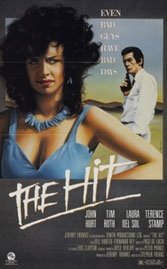 Brush past the ordinary mobster-drama storyline and 1984’s “The Hit” becomes an engrossing meditation on death. A stylish early work from British director Stephen Frears (“My Beautiful Laundrette”), it opens among the hushed Spanish campestrals where former criminal Willie Parker (Terrence Stamp) lives in hiding from gangsters he betrayed a decade before. His fortress is as good as an eggshell. Soon, hired grim reaper Mr. Braddock (John Hurt, stone cold and on the hunt) rolls in from Paris, assigned to bring back snitching Willie.

What makes the ensuing road trip entertaining is that not even the prospect of a death sentence can peel a smile from Willie’s face. The grin perturbs Braddock and more so his childish accomplice Myron (young Tim Roth), who’s convinced Willie is scheming and should die on the spot. Roth styles Myron as a half-breed British bastard of both punk and teddy boy origins. His punchy acting knocks the soul out of everyone around him. Meanwhile, Stamp’s monk-like portrayal of Willie is best when he waxes Zen (on death: “It’s as natural as breathing, why should we be scared?”)

When they kidnap a woman after a break-in gone bad, Braddock and Myron gain substance. Maggie (Laura del Sol), who pretends to not know English, is pretty enough to snap Myron’s brutal heart in two. She tests Braddock’s once-impenetrable cool. Cue the swashbuckling, which is boyish and half-wit at best. Delivering Willie to Paris in time for his rub-out becomes an afterthought for these foolhardy men, distracted by a woman who’s not as dumb as she may look.

Paco de Lucia’s seductive Spanish guitar lightens the mood. The characters are otherwise moody. At the end it’s the look on Braddock’s face that matters more than Willie’s.