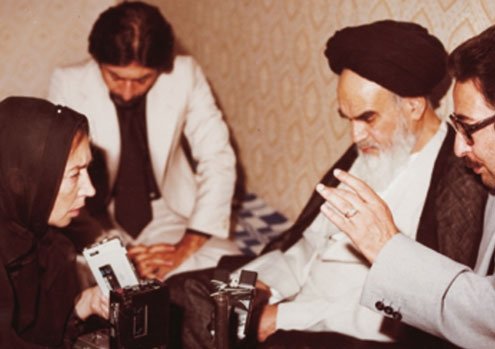 Fallaci on Iran's Ayatollah Ruhollah Khomeini: "He was not a puppet like Arafat or Qaddafi or the many other dictators I met in the Islamic world. He was a sort of pope, a sort of king — a real leader."
O

“You’re not a historian. You’re a journalist,” sparred Wallace, an inimitable interviewer much like Fallaci.

“No sir,” Fallaci fired back. “A journalist is a historian.”

One of the most revered and controversial writers of her time, Fallaci, who died in 2006, was often featured in her own pieces, becoming at once author and subject. Fallaci strived to chronicle history from the vantage point of a participant, filtering news through her own moral lens, and crafting her rich, incisive reporting in the first person. “On every professional experience I leave shreds of my heart and soul; and I participate in what I see or hear as though the matter concerned me personally and were one on which I ought to take a stand,” she wrote in the preface to her acclaimed collection of political interviews, “Interview With History,” first published in English in 1977.

The native Florentine soared to fame as a political correspondent for the Italian magazine L’Europeo in the 1960s and 70s, when the fractured political and social climate was ripe for her adamantine skepticism. At a time when there were virtually no women in the battlefield, Fallaci dedicated herself to reporting from the war zones of Beirut and Vietnam. In 1968, while covering the Tlatelolco massacre that followed political protests in Mexico City prior to the Summer Olympics, Fallaci was shot and left for dead by Mexican forces. She painted this brutality with lyrical prose and riveting, narrative brushstrokes that went well beyond the delivery of facts (“The wall they’d put us up against was a place of execution; if you moved the police would execute you, if you didn’t move the soldiers would kill you, and for many nights afterward I was to have this nightmare, the nightmare of a scorpion surrounded by fire…”)

Fallaci was no stranger to controversy at any stage of her career, with her late years devoted to increasingly profane excoriations of Muslim immigration, particularly after the Sept. 11, 2001 terrorist attacks.

But she was probably most renowned for her searing political interviews, in which she raked some of the most powerful figures in the world over the coals. Henry Kissinger, then President Richard Nixon’s secretary of state and national security advisor, called his meeting with Fallaci “the single most disastrous conversation I have ever had with any member of the press.” Her questions goaded him into describing himself as the lone “cowboy” leading the charge in Vietnam. Fallaci was heavily derided for her adversarial interviewing tactics, but her fearlessness handling her subjects was unmatched. “I want to understand why everyone dislikes you so much, why you are so little loved,” she brazenly asked Libyan despot Muammar el-Qaddafi during an interview that she likened to “being caught in a riptide.”

Though Fallaci’s interviews were grueling, they boasted enormous influence. The immense publicity generated by her 1969 interview with American POW Lt. Robert Frishman resulted in his subsequent release by North Vietnam. Indian Prime Minister Indira Gandhi cancelled an upcoming peace conference with Pakistan’s Prime Minister Zulfikar Ali Bhutto after reading remarks he’d made to Fallaci about her character (“A diligent drudge of a schoolgirl, a woman devoid of initiative and imagination.… She should have half her father’s talent!”)

Yet strangely, for a woman whose professional life was dedicated to the investigation of power, Fallaci claimed to be completely unaware of her own. “Do you have power,” Wallace asked her. “Oh, no. I have not power,” Fallaci replied. “We [journalists] are like dogs. Bow-wow-wow. Nobody listens to us.”

One of Fallaci’s most epic encounters was with Iranian leader Ayatollah Khomeini in 1979. Fallaci stripped herself of the chador in his presence, denouncing it as a “stupid medieval rag.” Helping to fan the flames of Fallaci’s notorious act of rebellion was the humiliating comedy of errors that preceded it.

Afraid that donning the “sacred garment” before leaving her hotel might tip people off to the pending interview, Fallaci asked her guide, Salami, if she could change into the chador in his car. She was refused because she is a woman.

Three separate hotels denied Fallaci a room for the same reason. Even the hotel bathrooms were off limits to her sex. Finally, the enterprising Salami suggested the town hall, where Fallaci was permitted to change in an empty room. Half undressed with Salami’s back to her, a mullah walked in on the pair. The terrible scandal was rectified only when Fallaci agreed to marry Salami in a quickie, Islamic ceremony. (He was already married, but Muslim law allowed him four wives).

By the time Khomeini insulted Fallaci by insisting that “the chador is only for young and respectable women,” the stage for protest has already been set. “Everything that happened to me happened because of the chador that I had to wear in front of the diabolical old man.” Fallaci’s Scarlet Letter adventure revealed more about the misogynistic oppression of women in Khomeini’s Iran than anything gleaned during her interview.

In a trailblazing career that spanned more than half a century, it was just one of a host of stark and enlightening moments in which the historian made history herself.