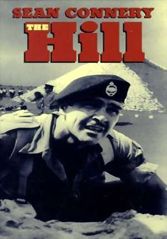 Too much “Bond, James Bond,” can drive you into bleak territory. Weary of his purring, superstar status, Sean Connery took time out to work with director Sidney Lumet on this brutally bleak story of outlaw British soldiers in a Libyan military prison during World War II. Filming in black and white, Lumet focuses on Staff Sergeant Williams (Ian Bannen) and Regimental Sergeant Major Bert Wilson (Harry Andrews) who degrade and humiliate their new charges for petty offenses. As metaphor, the movie is about the indecent collapse of British order.

Connery is Joe Roberts, a demoted sergeant-major who resists the abuse. His tenacity is met by increasingly harsh punishment and eventually provokes revolt. Connery’s rage to act outside the box is palpable and all the more gripping considering the movie was made between “Goldfinger” and “Thunderball,” the peak of 60s Bond-dom. A must for Connery fans. Rumor has it Daniel Craig checked out “The Hill” version of Connery to help flesh out his own harder, more nuanced version of the Ian Fleming character. Superb performances all around, including one by prisoner Ossie Davis.