The Heart of a Dog 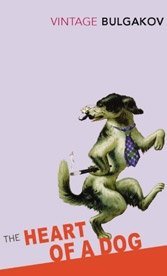 By Mikhail Bulgakov, translated from the Russian by Michael Glenny

Bulgakov’s 1925 hilarity channels the lucid lunacy of Mary Shelley, Franz Kafka, and Mel Brooks as if all three somehow lived timelessly down the hall and were hard at work concocting rude monsters and comic cockroaches. Facing yet another lunacy, that of strict early-Soviet Era censorship, the Russian writer chose a literal swan dive off the satiric deep end — a novella about a bourgeois surgeon who between repairing limp penises and female libido (while humming, no less) takes in and plumps up a wounded stray only to cut him up and niftily insert a dead man’s testicles and an overactive human pituitary gland.

Out of this (vividly described) but botched surgery — the donor was a criminal — emerges a squat lumpen humanoid (“… a specimen of so-called humanity…”) that smokes, swears, flirts lewdly and eats fleas from its armpits, a rollicking, creature-feature parable for the tragicomic transformation of 1917. The upscale doctor, no fan of communism, suddenly has a pet-turned-Bolshevik annoyance that calls him Dad, names himself (oh-so-modernly) “Poligraph Poligraphovich,” and sides with party-line co-op activists who think the esteemed professor occupies too much apartment space.

Bulgakov was predictably unable to publish the story, its raging, scalding sarcasm mostly flummoxing censors who considered its author as crazy as he was subversive, often unable to distinguish between the two. In fact, it took half-a-century before his vodka-drinking, mayonnaise-loving dog-man finally made it into print, in 1968.

Aside from challenging early Soviet leadenness, Bulgakov — a doctor by training — showed himself on the literal cutting edge of more than a century of fiction as yet unsure of what to make of modern science, eugenics, and any number of potentially regenerative possibilities. His “man with the heart of a dog” is a snarfing comic Frankenstein with a blue tie and a foul mouth who comes to represent two revolutions, both experiments and both failures, a dog-man and a system that are both “purely bestial.”