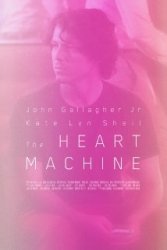 Twenty-something Brooklynite Cody (John Gallagher Jr.) spends acres of time on Skype chatting and otherwise fantasizing with Virginia (Kate Lyn Shiel), his virtual “girlfriend.” Virginia is on a writing fellowship in Berlin fellowship, or so she says. So why then do the background sirens sound like New York’s? Cody’s suspicions lead to sleuthing, not too hard since Virginia lived — or lives — in New York’s East Village. “When things in your life seem too good to be true,” says Cody, “they probably are.” He’s right.

Wigon uses his video game lovers (and Shiel’s drifting, alien eyes) to illustrate hopeful but stunted cyberspace relationships in which earnestness and duplicity overlap (it gives little away to say that Virginia isn’t in Germany). His fable predictably enlists Skype, Facebook, Craig’s List, text messaging and kindred apps, which together broker the molecular movements of lonely souls but fail to provide the needed glue. With so much gamesmanship, bonding is a swift precursor to breaking apart.

It’s a sad but poignant rumination kin to 2007’s “In Search of a Midnight Kiss,” another reflection on online soul shopping and the difficulties of sipping successfully from what Virginia calls “emotional reservoirs,” which often seem full until dipped in firsthand.