The hand that takes 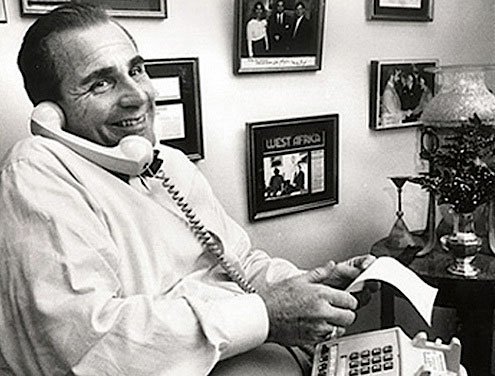 Edward von Kloberg, 1942-2005, pictured in his Washington office in 1990. Photo courtesy of the Washington Post.
N

ever ignore a blinking message. “This is a voice from the past,” says a man whose hushed tones are, to me, an alarming amalgam of ancient elegance and newfound resignation. I do not recognize the intonation and shy from mystery callers.

“This is a voice from the time of your mother.”

The man pauses to prolong the moment’s peculiar awkwardness. Here then are two male snakecharmers — a man of 51, one of 63 — in a phone stalemate.

Finally, “This is Ed von Kloberg. Do you remember me?”

He has not misled me. He’s the past incarnate.

Once upon a time, in a Rome stylishly engaged to its own aplomb, lobbyist von Kloberg loitered here on his way to a dictatorship of choice. American but pretentious, he’d jet in and out. He’d circle around my mother, whom he adored for her title, principessa. To keep me interested, he’d explain (tugging on a natty Vandyke beard) why Romania’s Ceausescu was a misunderstood reformer and why South Africa deserved a break under Apartheid. He liked Saddam Hussein (as did the United States at the time) and cuddled backwater royalty.

I disliked him for his preciousness.

Still, he spoke persuasively, with a sweeping faux-intelligence that suited embroidered affectations (the “von” or “van” was of his own making). Most important, Ed knew to charm — essential in Washington, a delightfully phony of cities crippled by inferiority complexes and atremble with envy.

Why don’t you come work for me? You’d be great in public relations, he beckoned in the 1980s while prowling, drink in hand, through our Rome living room where he’d lounge on a Louis XIV chaise my mother had excavated from a Lyon antique dealer in the 1950s.

He sounds weary, weather-beaten, impalpable. To hear him clearly, I press the receiver to my ear.

“Christopher Winner,” he says, “Your beautiful mother. How I remember her. When did she die?”

“So young. So beautiful. I have a photo of her…”

Where are you calling from? I ask.

“In Rome. This beautiful city. And what are you doing?”

I’ve started a magazine, I tell him.

“Oh, that’s wonderful. Wonderful! Christopher, I am truly thrilled for you. It’s what you love. Your mother would be proud.”

His sincerity is disinterested; he seeks nothing, he says. Paradoxically, Ed had that streak: to rise above himself in praise of others; the way World War I aces waved to adversaries who’d shot them from the sky. He worshipped panache.

I explain it is the week of the pope’s election. I am busy. I can’t speak. I’m too distracted. But Ed, I add, I’d love to see you. I’m feigning.

“And I would love to see you,” he answers, satisfied. “I want to talk about your mother. I want to catch up. You know, I have something for you: a picture of her. A beautiful picture of her I want you to have.”

I grow impatient. I’m sentimental enough to defend against sentiment in others. I stonewall kindness. It’s an insulating ruse.

But I sense intuitively that something’s wrong. I say nothing.

“I’m staying in your fair city for a while,” he says. “It’s always so special to me here.”

“I understand. You’re a busy man. You have a magazine.”

I give him my mobile phone number and hang up.

Memories emerge. I recall a 1995 Harper’s magazine piece in which he’s called “the lobbyist of choice for tyrants and mass executioners.” Insult entertained him; he loved the ink.

I see Ed and my mother in our Rome kitchen assembling canapés on a silver tray. He touts Liberia, defends the indefensible (but appealingly); one day he drives me to work, chatting about life in Washington among the “elegant sharks — of which I’m one, or so they say.”

His attraction to my mother was sincere (he craved her stylish appetite) and he bid for her approval and contacts. Women were not his preference, but it didn’t show.

A week passes between his calls. A German becomes pope. The casual reabsorbs me. I forget Ed.

He phones again in late April. His voice is etherized. He is drunk or sad, or lost — deeply, completely.

Chatting about better times might cheer him, he says. I consider it.

“I know how busy you are,” he persists, “but it would be nice to see you and I now have a telephone number I can give to you.”

He reads out the numbers uncertainly.

“Now, let me read back your number,” he continues.

He does so in slurred speech. “Three,” he says, “four,” “oh,” and stops. “Better that you call me. I have the photograph of your mother…”

He rings again on Thursday, April 28, and leaves a meandering message.

“It’s Ed von Kloberg, I’m still here. Still me. I would love to see you. Please call me when you can.”

The next morning, the 29th, he leaves another message.

On Saturday, the message light blinks again but I ignore it.

I watch television and read Bob Dylan’s autobiography. The messages can only be Ed — poor Ed — and what to tell him? That I can’t be bothered?

The phone is silent through a mundane weekend. I contemplate my own melancholy. It’s the self-indulgence of someone coming off a big story — the papal death and election. I drop Ed from my radar.

On Tuesday, a journalist friend forwards a link to the Washington Post. It might interest me, she says.

“Tyrants’ Lobbyist, Flamboyant to the End: Von Kloberg Dies After Years as an Image Shaper for the Reviled.”

Ed von Kloberg has killed himself.

“At night,” the newspaper says in its tribute, “he sported one of two favorite black capes: one with red lining, the other with prints of doves.”

I once saw red lining and a gaudy tuxedo, but hardly an ostentatious cape of the kind my father once wore.

“His grandmother provided him with an entertaining allowance, which he used while at Princeton University to throw ‘great parties,’” the newspaper continues.

He took his suicide leap on Sunday. He’d been very ill, the paper explains (sickness is among suicide’s most reassuring rationalizations). Italian radio mentions a spat with a gay lover. Bad love is yet another of suicide’s ports of call.

I know nothing of this. I know only that some acts cannot be explained, only accepted. Some voices are not from the past but from the other side. Some sounds, like Ed’s to me, are already ghosts from the stammering afterward.

But I have my guilt.

So never ignore a blinking light. Speak to it. Or try to.

Speak to the past. It is friendly. It is needy. It has final words. And it always comes back for more.