The half-life of Romano 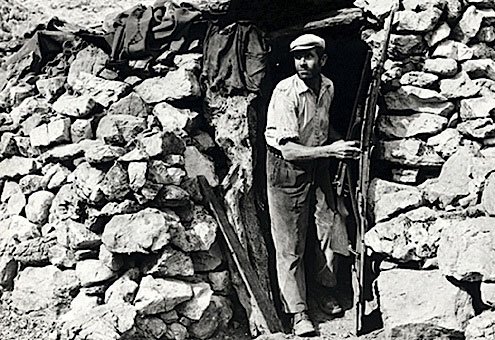 y knock at the door is met with “Chi è?” — an order from the other side to identify myself. “L’americano,” I respond. A bolt is released, the door swings open, and a stout 60-year-old man in a camouflage vest shoots me a careful glance and slaps me lightly on the cheek before ushering me in. We push past a handful of elderly men singing in sardo. Clouds of smoke emanate from hand-rolled cigarettes despite the island’s public smoking ban.

I’m led to a backroom where a framed Che Guevara montage hangs, bordered by the Cuban, Palestinian, and Sardinian flags draped from the wooden oak beams lining the ceiling.

“You Americans are a people born from the extermination of other cultures,” he says flatly.

“I’ll take a Montenegro,” I reply, nodding towards the bar. Romano is in a good mood tonight. I’ve changed his name for reasons that will soon be apparent.

There are two Sardinias. The first offers turquoise and azure coastlines. This is the Sardinia that lures streams of cruise ships and draws the world’s elite to the Costa Smeralda, where the bars have a debonair ambiance and twenty-somethings decked out in Armani suits and Prada glasses perch in outdoor hammocks sipping mojitos.

The other Sardinia is less visible. It exists off the tourist map, under a limestone arch, and behind bolted doors. It is a culture shaped by exploitation at the hands of foreign interests since 900 B.C. Consequently, an air of rebellious defiance radiates from Sardinia’s core. This independent spirit is guarded closely in a bar known only by its owner’s name in the island’s capital, Cagliari.

The bar itself is nearly as arcane as the man behind the door. Nestled in the Castello district, a narrow, 17th-century cobblestone maze perched atop a ledge overlooking the sea, Romano’s doesn’t have a dress code, or even a sign. A blue florescent light dangling from a wire above the door identifies the place. Black and white mug shots of Sardinian bandits from the early 1900s dot the walls. Each face appears haggard and pained and could pass for the bar’s clientele. There are no set hours. When the light is off, Romano doesn’t want visitors. When it’s on, Romano offers homemade liquor made from myrtle leaves, live acoustic music, and a running monologue assailing your forefathers.

I should just nod in polite agreement, but I never do. After all, the man did spend 13 years in maximum security prison for his role in planting a bomb in a Sardinian hotel in the 1980s. Details are scarce, but in his other life Romano was an active member of the Partidu Sardu d’Azione, a radical militant group whose central goal is Sardinian independence. The group was responsible for a string of past terrorist attacks aimed at thwarting foreign influence in Sardinia — the historical cause of the group’s resentment and an obstacle to the island’s bid for secession.

After his release, Romano joined the Red Brigades to fight in a more “attainable” battle: against the political abuse of the Sardinian working class. His rumored involvement in a shooting in the late 1990s led to another prison stint — this time on an uninhabited island between Sardinia and Corsica — for the cryptic charge of “militant anti-fascism.”

I’ve only asked Romano about his past once. It was a slow night at the bar and the cloud of cigarette smoke wasn’t suffocating. He shook his head and walked away in silence. Before I could call his name to apologize, he turned on a dime and walked right up to me, raising his finger and his thick eyebrows. “I’ve never hurt anyone.”

Ironically, it seems that the latest cause Romano has fought against is going to exact its revenge and take away the one constant in his life: Sardinia. As of this writing, arrangements were being finalized in Cagliari’s tribunal court to exile Romano from the island, citing his failure to comply with his court-ordered midnight curfew. Romano argues that such a measure is unprecedented and is merely the result of politicians acting in their own self-interest.

He may have a point. Two high-ranking judges in the tribunal court live within earshot of Romano’s. In a bar synonymous with rebellion, things can get noisy. Heated debate nearly causes Romano and me to come to blows each time I visit him. Tonight is no different. But he always unbolts the door, offering me a glimpse into the other Sardinia. “The imperialist drinks for free tonight,” he says with a wink.

It’s late. I follow the cobblestones to the still visible cannonballs fired into Castello’s walls by Americans in World War II. I look down at the turquoise and azure coastline before going home.