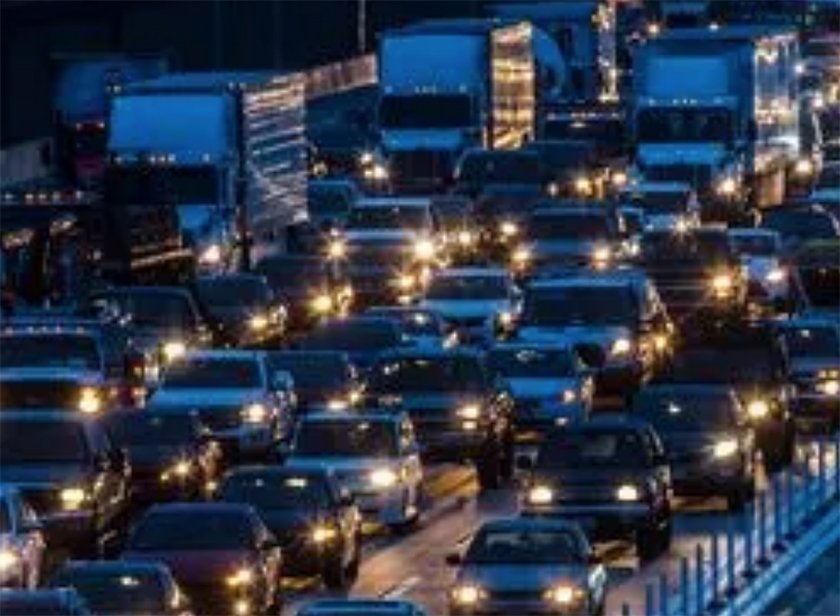 Gridlock, both outside and in...
I

wish I could tell you just which Los Angeles freeway I was on when, gridlocked, I took to pondering whether I should get back in touch with a certain person. By the time the thought came up in traffic, I’d already been mulling it over for a few days. Maybe gridlock’s purpose is just that — to make you zoom in on what’s been nagging at you.

The more I pondered the dilemma, the more I realized my desire to avoid contact was based on the prospect of potential emotional complications and the embarrassment that went with them.

Not very sound reasons, since I was raised by a family that advocated dealing with hard choices face-front.

But here I was, still temporizing.

Why? Because I have a relationship with regret that a ten-hour documentary couldn’t cover.

If I didn’t get in touch, my inner logic told me, I’d regret it all my life and one day, no doubt on my deathbed, whisper, “I should have reached out. I should have called one last time.”

Gridlock is not always about cars. It also has a mental and emotional side.

All my life, I’ve been something of a professional over-thinker. I struggle to express both doubt and joy. When faced with a problem, I create my own gridlock of the mind, which can go on for a long time. I might be the one still in her car long after the traffic clears, still mulling things over.

Not surprisingly, I’ve found myself on on the receiving end of lots of “fix-the-problem” advice. Many have urged me just to act.

I’ve listened to this mantra, and once considered getting tattooed (don’t tell my parents), maybe with the words, “Live, Love, Laugh.”

So far, I can’t find those words inscribed anywhere on my body.

When faced with a problem, I create my own gridlock of the mind.

Other would-be strategic life advisors have suggested that I “start saving for retirement now.” Um …

But none of what I’ve been told has pushed me any closer to action, or any further from almost wanting to indulge regret.

The result leads to a riff on the “okay, whatever” theme, which is just another way of acknowledging your inner gridlock, since “whatever” gets you nowhere. It’s just a verbal recipe for more postponement.

I’m an actress. Movies helped school me in regret. You needed to tell loved ones you cared. Or else. And even that might not work because you’d then wonder if you’d said it enough times for it to sink in.

All of which struck me as both dumb and contrived.

Common sense told me that telling someone you cared meant next to nothing if it was on a schedule, rather than something spontaneous that rose up inside you and you felt you had to say. One “I love you” said at the “right” time mattered more than five thousand Hollywood-scripted pledges.

Feeling and expressing affection isn’t a matter of outdoing your brother or sister or pet. It’s not a numbers game.

I was naïve. Regret can come long before your deathbed. Plenty of things need to be done now, need to be expressed immediately for no other reason than to keep doubt and anxiety at bay. If you’re an over-thinker, you can sit around thinking about how things should be because before long you’ll be fifty and, guess what, mired in regret. Play it my way, living life in gridlock central, there isn’t a thing you won’t end up thinking twice about (another way of saying regretting) as soon as you’re old enough to turn wistful. And I’m getting toward that point at the ripe old time known as one’s mid-twenties.

Admittedly, regret comes in different shapes and sizes, so I can’t see myself bemoaning bad choices in youthful wallpaper at forty-nine.

Another part of being an over-thinker is that your chances of being a regret overachiever are that much higher. You’d be in a better position to go for the gold early in life, with a trail of second-guessing stuck behind you like a tail. You can even feel regret coming on in real-time. This can happen, say, when you’re being operated on knowing that you told the surgeon you wanted only local anesthesia but now, in no position to change a thing, feeling the regret in the form of pain.

The most beautiful hands are the ones that are the roughest and the most worn.

Many of you out there are by now impatiently saying, “Duh, this should not be news.” But here’s the thing: I’m a slow-learning girl, and because of that I’m now a bit paralyzed, like the traffic.

I once took a Facebook test that predicted I’d die at age twenty-three after driving into a wall. I’d have no time to mull over my life, let alone make room for regret.

Incredibly, Facebook was wrong and I’m still gridlocked. So what to do? Get in touch with the person because, inside, I fear regret? Wouldn’t it be braver not get in touch and take the chance of one day feeling unhappy that I didn’t? Isn’t a risky choice nobler than a knee-jerk one?

Am I taunting fate whenever I make a choice I know I’ll probably end up being unhappy with? Since Facebook got it wrong, I probably still have decades ahead, which also means decades of regret. Should I ask the gods for a waiver, so I can get all of the regrets out of the way now, even if their burden ushers in an earlier death?

Should I ask that my regrets be spaced out over time, like negotiating a mortgage? Hard to say when you’re in traffic.

Then again, maybe I’m meant to see regret from an artistic perspective, as part of my life’s oeuvre.

Would Hemingway’s novels be as popular if he wasn’t known to have had too much to drink, beckoned brawls, and finally “accidentally” shot himself? What about Dylan Thomas and James Joyce — one a drunk, the other a crank going blind in his Paris hotel room? Their generation all but lived for regrets, no excuses.

Finally, I love hands — they’re the first thing I notice in people. The most beautiful hands are the ones that are the roughest and the most worn. Doesn’t my life deserve to be used and worn, too? Isn’t a life filled with road bumps, regrets included, better than a one given over to deference, to shyness?

I’d like to think so, if only such lives didn’t reek of cowardice, selfishness and artistic disdain.

As for the person who triggered all this gridlock thinking, I still have a few more days to overthink my decision. Days I’d like to spend miles from this freeway, living, loving, and laughing.

And if you’re wondering if I ever got around to getting in touch with the mystery person who triggered all this overthinking, I didn’t have to — she got in touch with me. One less regret to deal with, no thanks to me.